Zimbabwe, like many African countries, faces an ongoing struggle to secure fair compensation for its mineral wealth. The question of how to maximise government revenues from the mining sector is a complex matter. 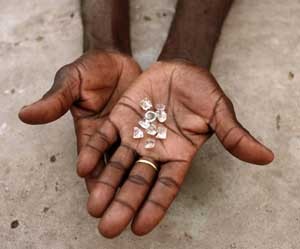 But turning the sector over to state-owned mining companies has rarely optimised mining revenues. Whatâ€™s needed instead are improvements in management practices, regulations, regulatory capacity and the investment environment.

This issue is back in the Zimbabwean spotlight after the countryâ€™s president, Robert Mugabe, announced that the government will take over all diamond operations. His move came soon after the government failed to renew mining licences. Private mining companies were ordered to cease operations, leave their equipment and vacate their premises.

Diamond mining in Zimbabwe has a short but turbulent history. The countryâ€™s diamond resources are concentrated in Marange, in its eastern region near the border with Mozambique. A number of private mining companies have operated in partnership with the state-owned Zimbabwe Mining Development Corporation (ZMDC) since the late 2000s. This arrangement began after thousands of artisanal miners were violently forced off the newly discovered alluvial deposits.

The government holds a 50% share in diamond operations through ZMDC. Despite this, it has reportedly received insignificant revenues from the sector in recent years.

Zimbabweâ€™s former finance minister, Tendai Biti, recently estimated that mining companies may have looted as much as US$14 billion from Zimbabwe over the past seven years.

It is very possible that the decline in royalty payments and tax revenues is due to production volumes being under-reported, tax avoidance and diamond smuggling. Zimbabwe has inadequate regulation and the diamond sector lacks transparency. But there are a number of other factors that have likely contributed to the sectorâ€™s declining production and government revenues.

Some experts believe that much of Marangeâ€™s alluvial resources have already been exploited. This would leave mainly kimberlites, which are more capital intensive to produce.

Second, about 90% of Marangeâ€™s diamonds are of relatively low quality. They therefore donâ€™t yield high prices on the world market. They also tend to sell at discounted prices on world markets because of trade sanctions that have been extended to early 2017. These are being enforced by the US and the European Union because of human rights violations.

Third, mining companies have resisted government pressure to develop open-pit or underground operations. Given the low quality, alluvial nature of Marangeâ€™s deposits and the fact that they are likely already very depleted, it is unclear whether upgrading operations to reach deeper resources would be economically viable.

Even if upgrading operations were feasible, this would require considerable capital investment. Mining companies are unlikely to make these investments because Zimbabweâ€™s business environment is unstable and threatening.

Such an oppressive business environment hits mining companies the hardest. They cannot move their operations elsewhere, as they are tied to where the natural resources are located.

Zimbabwe also has an inclination towards expropriation. It is therefore hardly surprising that mining companies are reluctant to invest, preferring the easy pickings of alluvial mining.

The newly created state-owned Zimbabwe Consolidated Diamond Corporation is set to take over the mining companiesâ€™ assets and assume all production operations. But consolidating operations under state ownership is not, in isolation, going to solve governmentâ€™s efforts to raise its revenues from the sector.

There is a very good reason that only a handful of state-owned mining companies are engaged in production operations worldwide. Where they have been established they have tended to be less efficient, partly because they are often shielded from competition. They have also been more poorly managed than their private-sector counterparts, leading to deficient outcomes.

Successful state participation in the mining sector is rare. Among the few exceptions are Debswana in Botswana and Namdeb in Namibia. Both are joint ventures between the governments and the diamond giant De Beers. But their experiences cannot be easily replicated in Zimbabwe.

For starters, Zimbabweâ€™s alluvial diamond deposits may be far more fleeting than the deep, extensive deposits in Botswana and Namibia. This makes it improbable that Zimbabwe will enjoy the same long-term horizons as those countries.

Further, Zimbabwe lacks a trusted, experienced and private-sector company with the capital and technical expertise needed to develop open-pit or underground mines. Zimbabwe also lacks the resources to go it alone.

The alternative to state ownership

Rather than state ownership, Zimbabwe needs to improve management practices, regulations, regulatory capacity and the investment environment. Necessary reforms include enacting a comprehensive regulatory regime to govern the fiscal and other facets of the entire diamond supply chain. In addition, Zimbabwe should ensure strict transparency and accountability of the diamond sector.

All mining sector laws and regulations should comply with international standards. These include the Extractive Industries Transparency Initiative and Kimberly Process Certification Scheme minimum requirements. All contracts should be published, together with production volume and revenue information. It is also vital that state-owned entities be subject to the same reporting, disclosure and other requirements as private companies.

The capacity to regulate the mining sector must be strengthened. Relevant regulatory institutions must have autonomy and adequate enforcement capabilities. This is particularly pertinent since the Zimbabwean government will be acting as both a commercial entity and as the regulator.

As a commercial entity it will be aiming to maximise profits, potentially at any cost. As the regulator it will be enforcing environmental, social and other regulations, which may lower the profitability of operations.

Given this conflict of interests, the government may fail to adequately regulate the diamond sector. Otherwise regulatory failures may lead to corruption, revenue leakages, and social and environmental violations.

Finally, it is imperative that government improves Zimbabweâ€™s investment environment to attract more responsible mining companies. Until then, only fly-by-night investors with high-risk thresholds will be willing to operate in its mining sector. But with such investors, Zimbabweâ€™s diamond mining will continue to yield little benefit for the country.

This article first appeared on the The Conversation Africa.