ABOUT 30 people were Thursday killed when a Harare-bound Pfochez bus collided with a Sprinter kombi heading in the opposite direction 20 km outside Kwekwe. 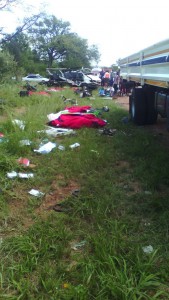 According to the police, 28 people including both drivers, died on the spot while 36 others were seriously injured and admitted at Kwekwe hospital while others were rushed to Harare and Gweru hospitals.

Police said the Pfochez bus driver lost control of the vehicle after it burst its left front tyre around 1:30pm near Kwekwe River and encroached into the opposite lane, causing the head-on collision.

The bus landed on its side while the kombi was reduced into a heap of metal.

The fire brigade teams battled for three hours to retrieve the trapped bodies from the wreckages.