GOVERNMENT says the country has lost livestock worth $54 million to the devastating El Nino induced drought. 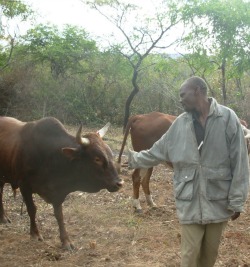 Director of economics in the Ministry of Agriculture Mechanization and Irrigation Development, Clemence Bwenje, told senior government officials, diplomats, civil society activists and the media in Harare Wednesday that the national herd is decreasing by the day.

â€œDuring the past months, livestock condition and consequently livestock prices have decreased significantly in some parts as a result of poor grazing and water shortages,â€ he said.

â€œThe highest livestock deaths recorded due to drought is in Masvingo province with 12,373 animals reported dead (50% of reported national deaths) and at a national level we need $53, 878 825 to restock the national herd.â€

The drought has also impacted negatively on water supplies leaving the availability of the precious liquid for domestic use inadequate.

The drought has attracted attention of the United Nations which is pulling resources to avert hunger.

The UN agencies with support from development partners and in cooperation with non-governmental organisations (NGOs) have so far reached more than 1 million affected people with $76 million in funding from western governments.

They have also prepared a revised humanitarian response plan, which identifies the priority humanitarian needs of over $350 million, for the period April 2016 to March 2017.