The Vigil has written to two prominent British MPs to seek their support for the expulsion from the UK of a Nottingham GP Dr Sylvester Nyatsuro and his wife Veronica who have seized a farm in Zimbabwe. 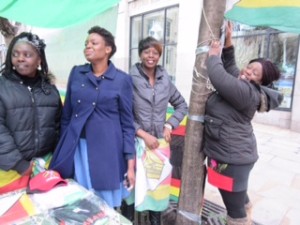 The MPs are the former long-time cabinet minister Ken Clarke who represents the Conservative Party in Rushcliffe constituency, Nottingham, in which the Nyatsuros have a large and luxurious home and Vernon Coaker, a minister in the last Labour government who represents the neighbouring constituency of Gedling, in which the Nyatsuros run an NHS clinic. Below is the letter we have sent them:

Zimbabwean exiles in the UK ask for your help as we continue our protest against Nottingham GP Dr Sylvester Nyatsuro and his wife Veronica who run a NHS clinic in Carlton, Nottingham.They have violently seized a farm in Zimbabwe from a white Zimbabwean couple who bought it some 30 years ago with the approval of the Mugabe regime. Dr Nyatsuro claims he has been allocated the farm although he has lived in the UK for the past 15 years and is a British citizen.Â

You will be aware of the desperate situation in Zimbabwe, in particular the real prospect of starvation. The UN recently warned up to a third of the population are facing hunger.Â

The Zimbabwe Vigil which campaigns in the UK for human rights in Zimbabwe, along with our sister organisation theÂ  Restoration of Human Rights in Zimbabwe, has submitted a petition to the government calling for the revocation of the Nyatsurosâ€™ British citizenship (see: http://zimvigil.co.uk/the-vigil-diary/760-kick-out-zanu-pf-zimbabwe-vigil-diary-27th-february-2016).Â

The petition is currently being considered by the Home Office. We feel that the support of aÂ  former Conservative Lord Chancellor and a former Labour Home Office minister such as yourselves would add weight to our request.Â Â

On a broader front we are campaigning for the situation in Zimbabwe to be discussed in Parliament andhave enlisted the support of Kate Hoey MP, Chair of the All-Party Parliamentary Group on Zimbabwe and, on the Conservative side, Alok Sharma MP for ReadingWest and others.Â

We have staged a number of demonstrations outside the Nyatsurosâ€™ clinic which have received widespread publicity and plan to stage another demonstration there on 29th April to keep up the pressure on them to make up their minds between farming in Zimbabwe and doctoring in the UK.Â Â