â€œTHE world is asking, are there people in Zimbabwe? Are we cowards?â€ 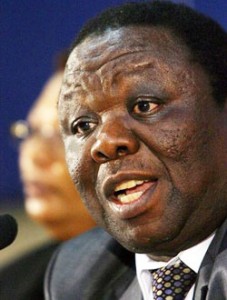 These were the frustrated remarks of former prime minister and opposition MDC-T leader Morgan Tsvangirai as he addressed supporters at Rudhaka in Marondera on Saturday.

The former trade unionist has been trying, and repeatedly failing, to topple President Robert Mugabe since establishing the MDC back in 1999.

On Saturday, Tsvangirai suggested Zimbabweans were not working with him.

He complained: â€œWhen people run away from a neighbourhood police officer, what is that?â€

President Mugabe turned 92 last month and continues to rule out retirement. His Zanu PF party has nominated him as its candidate for elections due in 2018 when he will be 94 years old.

â€œThis other day I was with Mugabe at Sheraton [Rainbow Towers Hotel], and he said to me, Tsvangirai will you please watch out this step.

â€œYou will fall down if you are not careful; imagine him saying that to me?â€

Tsvangirai insisted that he is the countryâ€™s rightful leader, arguing he defeated Mugabe in the 2008 elections.

â€œMugabe has since acknowledged that I defeated him in 2008 but the question remains, why is he still in power?

â€œGive power to the mandated person, the person who was elected by the people. The whole world knows of a mandated leader,â€ said the MDC-T leader.