Where is Mugabe? The governmentâ€™s mouthpiece the Herald says he has gone to a cultural festival in India (accompanied by the Foreign Affairs Minister and a planeload of overpaid lackeys}. The fact that the obscure festival was not even attended by the Indian President didnâ€™t matter: Action Man Mugabe must be seen to be doing something and he only feels at home on a plane. 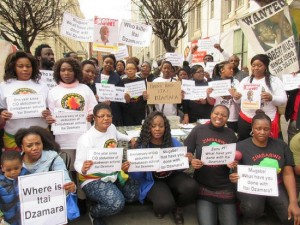 The Vigil knows that this is probably all a cover for another trip to his doctors in Singapore. Why should this be kept a secret? Zimbabweans have a right to know who is in charge, who is taking the decisions â€“ and, more importantly, why decisions are not being taken.

The International Monetary Fund has concluded its latest consultations in Harare leaving the door ajar to new loans to bankrupt Zanu PF. The IMF seems to think that promises of reform by the regime are bankable. The Vigil has a message for the IMF: read the report by the International Crisis Group in last weekâ€™s diary which expresses doubts that Zanu PF can â€˜walk the talkâ€™ of reform.

Zimbabwean ministers like Chinamasa can promise the moon but no one can deliver except Mugabe. And, as he has shown over civil servants bonuses, he will not make any decision which will imperil his hold on power.

So Chinamasaâ€™s promise of massive cuts in the government payroll is simply undeliverable. So are promises of reform of the indigenisation policy or action against parastatal corruption. So are all the other Chinamasa promises, including the fantasy offer to compensate dispossessed farmers.

The culture of denial in Mugabeâ€™s Zanu PF is shown by the partyâ€™s brazen hypocrisy over the abduction of human rights activist Itai Dzamara. We welcome the statement by the US Embassy in Harare on the anniversary of this outrage demanding justice. We urge the United States to take the advice of Bob Corker, Chairman of the Senate Foreign Relations Committee, who called on President Obama to prevent new lending to Zimbabwe unless there is meaningful progress to restore the rule of law and improve human rights (see: https://www.foreign.senate.gov/press/chair/release/corker-no-new-lending-to-zimbabwe-without-meaningful-reform).

The Vigil believes that any financial help to prop up Mugabeâ€™s odious regime will simply prolong the suffering of the people of Zimbabwe.

It was good to see old friends from the MDC UK who joined us to mark the Dzamara anniversary which was attended by around 100 people. For Vigil supporters it was the second Dzamara demonstration in a week following a protest outside the Embassy on 9th March. (see: https://www.facebook.com/www.rohrzimbabwe.org/videos/10153949189752836/).

FOR THE RECORD: 87 signed the register.