As the world commemorates International Women's Day, I cannot help but salute all the women out there for bringing all of us into this world, nurturing us, and teaching us life skills that have helped us become who we are today. 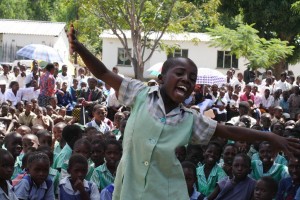 I have learnt very valuable lessons from my mother and my wife, the two most influential women in my life.

One of the most important lessons I have learnt is the undeniable value of empowering the girl-child, as an individual with the same ambitions, potential, capabilities, and aspirations as the boy-child.

There should never be any difference in what we inculcate in our children as far as what they can or can not achieve, because this is not determined by sex and gender.

My mother told me how her father never distinguished his children according to sex when it came to work and personal ambitions in life.

She told me how they would all be woken up around 4 am to go and work in the fields, and both boys and girls would do the same work.

Her father taught her to dream big and be determined to achieve those goals herself, and not to expect a man to fulfil those dreams for her, because they were her dreams, not his – ‘besides why should someone else be responsible for fulfilling your dreams, as that would effectively make him the achiever, not you’, she was told.

As my maternal grandfather’s family was poor and could not afford to pay school fees, my mother had to work at the mission school which she attended – including during school holidays -so as to earn money for school fees.

That also taught her the value of working hard to achieve one’s dreams – no matter what the odds against her – and not expecting anyone else to do it for her.

She always tells me about how she would restlessly sleep on the floor with only one blanket at mission school during the cold Manicaland winters – and how each shivering night would make her more determined than ever that one day she would buy her own house and sleep in a warm bed.

She would never dream of one day marrying someone who would provide her with a house and a warm bed – NO.

She was determined that she would buy her own house and a warm bed.

Her hard work and determination was noticed and got her a ‘scholarship’ to study nursing at another mission school – eventually becoming a general nurse in 1964.

She became an independent woman, who had her own dreams that she was determined to fulfill by herself.

In 1972, she even dated and married an unemployed man – my father – who at the time, although being a trained teacher, had been blacklisted by the Ian Smith regime for his political activities.

The reason she dated and married an unemployed blacklisted man, whose career prospects were all but zero, was that she was so self-empowered that she chose a man solely based on love, and not money, as she believed she was more than capable of achieving by herself whatever she wanted.

In fact, she was the main bread-winner in our family – although my father managed to get one or two odd jobs here and there – until Zimbabwe gained independence in 1980, when my father was eventuallyÂ  de-blacklisted and was able to return to teaching.

Although, my father and mother were now both gainfully employed, my mother never relaxed, as she continued playing a pivotal role in providing for the family, now as an equal partner.

She eventually managed to buy the house that she had committed herself to buying when she was shivering in the cold at mission school.

All the cars my mother ever drove, she bought for herself.

Not because she was wealthy – far from it, as she was just a general nurse – but had learnt the value of self-empowerment.

What I grew up witnessing in my mother was an independent, self-driven, and self-empowered loving women, who inspires me in being determined to raise my daughters in her mould Â – should God bless me with some.

I can surely say that, as parents, let us strive to empower our girl-children to have the same self-drive, confidence, and determination to achieve, whatever they set their minds on, by themselves.

There should never be any situation in which our daughters wish that there was a man around so that they could provide for this or that.

Whenever our daughters decide to date or marry, they should be so empowered that all they need from the relationship is love and respect, and nothing else.

Our daughters would have the confidence of being equal partners in the relationship, whereby they are not made to feel inferior to the man as a result of him being the financial boss.

That will also help kerb instances of domestic violence, as women would no longer feel compelled to marry or continue in a relationship that is clearly unsavoury.

Most women stay in abusive relationships because the husband is the breadwinner, or is wealthy and the woman can not imagine a life without that lifestyle.

Similarly, this would also reduce the incidences of widows who find themselves destitute, as a result of the death of the breadwinner.

When we have a self-driven and empowered girl-child, even incidents of our daughters entering into relationships with the so-called ‘sugar-daddies’ would be reduced tremendously, as a self-empowered girl would never want anything from a man – she would be determined that whatever she does not have at that moment, she can work hard and buy for herself one day.

They will also experience the power and joy of working hard for something and owning it.

If our daughters are empowered, not only with education, but also that self-drive to achieve anything they want by themselves, our nation – and indeed, the world – would be able achieve gender parity by 2030.

Â° Tendai Ruben Mbofana is a community activist, communications specialist, writer, and journalist. He writes in his personal capacity, and welcomes any feedback. Please call/WhatsApp: +263782283975, or email: [email protected]com