GOROMONZI: Irrigation equipment worth thousands of dollars that was controversially handed over to small-scale farmers here by Grace Mugabe last year has been looted, beneficiaries have revealed. 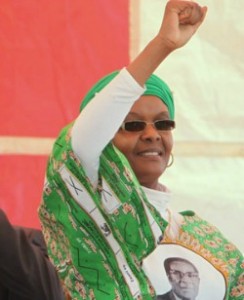 Government officials also reneged on a promise to install the irrigation equipment since last October, resulting in farmers losing their crops as a severe drought hit the country.

The equipment is part of the governmentâ€™s $38 million Brazil-funded â€˜More Food for Africaâ€™ programme which last year sparked controversy after opposition political parties threatened to go to court to stop Grace from donating the implements.

The opposition parties said President Robert Mugabeâ€™s wife was not a government official, adding she should not be doling out equipment secured through State borrowings at Zanu PF rallies where those who do not support the ruling party were not invited.

However, according to farmers who benefitted from the largesse part of the irrigation equipment at Chabwino B Farm, which included centre pivots, has since been stolen while some of it has been lying idle since October last year.

â€œMost of the equipment has been stolen and our concern, now, is that we are supposed to repay the $11,000 loan to government when we have not started any irrigation at our plots,â€ one of the affected farmers who spoke on condition of anonymity said this week.

The farmer added that repeated efforts to get the ministry of agriculture to install the equipment installed since October had also failed.

â€œThe government officials kept lying to us that the equipment would be installed during the summer but they failed to honour their promise.

â€œOur crops have since failed due to the low rains but we would have produced up to 15 tonnes per hectare had this equipment been installed.Â Worse still, we do not know how we will cope as part of it has been stolen,â€ the farmer said.

The equipment was meant to help ease the countryâ€™s reliance on rain-fed agriculture as changing global weather patterns have seen lower than normal rainfall in southern Africa resulting in Zimbabwe experiencing one of its worst droughts in many years.

The irrigation equipment at Chabwino is part of the consignment from Brazil which the government sourced through a loan made available by the South American nation.

Most of the implements were handed over to farmers by Grace Mugabe at her â€œMeet the Peopleâ€ rallies, raising the ire of the opposition which claimed that the distribution was being done along partisan lines.