FORMER Vice President and leader of the newly launched Zimbabwe People First (ZPF) party, Joice Mujuru, says her expulsion from government was inevitable as she routinely clashed with President Robert Mugabe during their meetings. 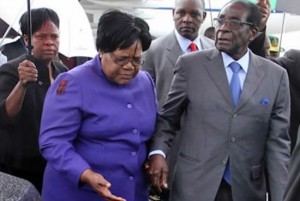 “I was always clashing with Mugabe over policy issues during our meetings and it was clear that one day I was going to leave government and the party,â€ said Mujuru in an interview with Newzimbabwe.com at her Mount Pleasant house last week.

Mujuru launched ZPF at a Harare hotel last Tuesday and promised to democratize Zimbabwe and run the country differently from Mugabe if elected into power in 2018.

Asked why she could not implement her proposed ideas during her 34-year spell in government, Mujuru said it was difficult to work with Mugabe as he does not give anybody with different ideas any chance.

On her exit from both Zanu PF and government in December 2014, Mujuru said it was false that she was fired, saying she left voluntarily. She said she â€œlaughedâ€ when Mugabe claimed to the nation that he had fired her for plotting a coup against him.

â€œI met Mugabe on the 1st of December 2014 and l told him that my hands were clean and that all the accusations against me were lies and that I was leaving. I bade him farewell,â€ said Mujuru.

â€œThe following day, I stopped attending the politburo meetings and that is when Mugabe wrote a letter to expel me.â€

Commenting on First Lady Grace Mugabeâ€™s â€˜meet the people ralliesâ€™ Mujuru said: â€œI really donâ€™t know where the First Family or the President and his wife want to take this country to.â€

â€œBut the end result is they are actually destroying Zanu PF and government. They are destroying the revolution because if this thing is not halted nothing is going to be left of the struggle.â€

Mujuru said as far as she can see it Mugabe and his wife were hunting down everybody who took part in the struggle.

On the ZPF launch, Mujuru said it was now time to build Zimbabwe in peace and bring about reforms in all sectors.

In her interview with NewZimbabwe.com, Mujuru said her liberation war experience gave her an advantage over other opposition leaders and political parties.

â€œI am sure people have been yearning for somebody who would take them to their destination or to the Promised Land. Yes, there have been other political parties but people have been telling us that in those parties they have been missing revolutionaries and liberation war fighters,â€ she said.