One of those things that linger in our minds even if we happen to be thousands of miles away from home, is the exquisite beauty of blooming Jacaranda trees especially in September and October, when our temperatures usually go north. The purple-blue blossoms on the trees and on the ground, just make us wonder how else natural beauty could be possibly presented or described. 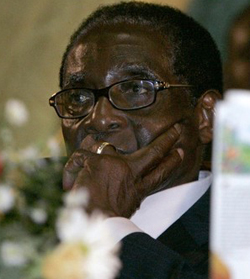 Driving through or walking past interlocked branches that form a perfect canopy of these species reportedly imported many years ago from South America, one gets the feeling that indeed, there is no place better than home. The temptation to pick a blossom and give it a gentle sniff, is irresistible. For a moment, one can forget about the political wilderness that Zimbabwe, under ZANU PFâ€™s legendary misgovernance, has become and getting worse by the day.

Admittedly, it does not seem to make much sense for one to dwell on the subject of trees and blossoms when our country is virtually burning and the media is awash with depressing news including that of the emperor flying several miles away with a coterie of hangers on only to make an expensive about turn before the intended destination. Contextually, the Jacaranda has a very special meaning to our democratic struggle.

Nonetheless, one thing that has survived the brutal force of state propelled destruction is our beautiful Jacaranda tree. Every summer, with or without the rains, we know that our cities, especially Harare and Bulawayo, will come to life with purple magnificence. In fact, the blooming season is a reminder that the rains arenâ€™t too far. Inspired by the Jacaranda, our determination for a free, prosperous, democratic and peaceful Zimbabwe where everyone is equal before the law, has not withered nor diminished. The more they suppress us, the more determined we become to free ourselves. We are like the mustard seed that shoots to life when it is buried.

For years, we were trampled upon by leaders who think that the only business of being in politics is to acquire power and personal wealth. They did everything to ensure they achieved their goal. In the early to mid-80s, the call for a One Party State system was deafening. Arsel Nyakunhuwa, a district commissar in the Lowveld those days, would never spend a day without shouting â€œPamberi ne One Party Stateâ€. At times I wonder if he really knew what it meant. This was before the time when Titus Maluleke, an ordinary primary school teacher who surprisingly became provincial governor in later years, had been recruited into active politics as a Shangaan-English interpreter by the late Henry Pote (rest in peace uncelebrated hero). The rest is history.

In no time, One Party State became a mantra and those who were opposed to it were branded sell-outs. Some of us who grew up in politically heterogeneous families where some were ZAPU and others were ZANU, were caught up in the â€œmoment of madnessâ€ that followed. In the process, â€œPasi neMachuwachuwaâ€ was invented and several families were abused, tortured, displaced or killed. But we did not give up.

Years before, we had heard about Eddison Sithole who went missing in the streets of Harare, like Itai Dzamara, without trace. Rhodesian operatives were fingered and the truth may never be known. That disappearance did not frighten us to the extent of abandoning the struggle. Later, it was Chitepo who was assassinated; again, we did not lose our resolve. Just before independence, on 26 January 1979, our revered hero, Josiah Tongogara, lost his life in very suspicious circumstances but our fighters defied fear and kept marching on until we attained our independence. Unfortunately, the struggle brought independence but not freedom, as experiences of the past three and half decades have shown.

During the protracted democratic struggle, our new heroes were battered, tortured, raped maimed, killed or forced into exile. The story of Basildon Peta, Ray Choto, Lovemore Madhuku, Grace Kwinjeh, Sekai Holland, Morgan Tsvangirai, Nelson Chamisa, Talent Mabika, Tendai Chiminya, Nabanyama and lately Itai Dzamara plus many more, is known. Like the Jacaranda, despite challenges and dangers posed by these political temperatures and pressures, we have blossomed as a people yearning for democracy and genuine freedom. We did not give up, we must not give up and we shall not give up until sanity returns to what was once known as the Jewel of Africa.

That said, it does not escape our minds that the Jacaranda tree, in isolation, doesnâ€™t look as beautiful and attractive as when they merge to form a natural canopy. It is more captivating when it forms that room with other Jacarandas, when they jointly shower the streets of Harare and Bulawayo with beautiful blossoms thereby turning our cities into a sea of purple, a real marvel to watch.

As we count down to 2018, let our resilient Jacarandas form that beautiful summer roof, jointly blossom, beautify and give new hope to our potentially great nation. Those who genuinely care for our nation should actively reach out to each other and co-author a new narrative for the Zimbabwe we want. Past failures must not stand in our way, they are not predictors of what the future holds. Let us remember that there is never a wrong time to do the right thing. If we fail this time, we only have ourselves to blame. Let us introspect, listen to our conscience and allow ourselves to be guided by our collective wisdom and aspirations. Yes, Zimbabwe is our motherland, united we can do it.