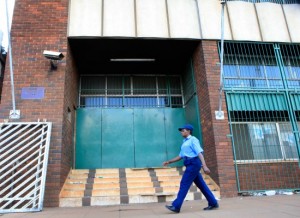 However, government continues to deny any immediate plans to mend ties with Tripoli which has failed to return to stability since Gadaffiâ€™s shock ouster in 2011.

Armed officers have continued to guard the Libyan embassy in central Harare although no flag or anything linking the building with the country is visible.

Foreign Affairs permanent secretary, Joey Bimha, told NewZimbabwe.com Tuesday the Zimbabwean government was still obliged to provide police
protection to the deserted embassy even though there have not been any subsequent attempts by either government to try and restore their broken relationship.

â€œWe donâ€™t have diplomatic ties with the Libyan government; we donâ€™t know which government to relate to. There is no government that we can relate to at this time,â€ Bimha said.

â€œIt is still diplomatic property belonging to Libya and thatâ€™s why we secure it,” he said.

Gaddafi, who had ruled his country with an iron fist for close to 40 years, was assassinated later in 2011 after putting up strong resistance against a rebellion which was aided by NATO.

His ouster torched celebrations from his own country and Libyan exiles abroad, something that also saw some ambassadors declare allegiance to the rebel led National Transitional Authority which was recognized also by some nations including 20 African countries.

In Harare, the then Libyan ambassador led over a dozens of Libyans in celebrating Gaddafiâ€™s ouster with scenes of his ecstatic compatriots seen burning portraits of Gaddafi and lowering the green flag, which was synonymous with the slain leader’s regime.

President Robert Mugabe, who was a close Gaddafi ally, chose not to go with the grain by taking an unprecedented action to expel Libya’s ambassador from Zimbabwe.

Ambassador Elmagrahi was given only 72 hours to leave the country, making it virtually impossible for the diplomat to arrange for the repatriation of some of his governmentâ€™s property.

He stood as the first and probably the only Libyan diplomat anywhere to pay the price.

Currently, Libya is not represented at whatever level in Zimbabwe.