This article is taken from The Southern Times 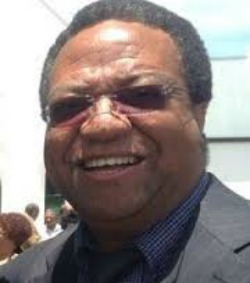 THE family of prominent Zimbabwean gynaecologist Dr Tham Matinde and young brother to United Kingdom-based broadcaster John Matinde, who was found dead at his Sunset Beach Property in Cape Town, South Africa, last July has expressed concern over the slow pace of police investigations into his death.

This has set off a powerful debate over the delays by the South African police to investigate cases of murder of foreign nationals in that country, and the improper conduct of South African pathologists.

Former Radio Three DJ John Matinde recently said his family was now wondering why South African police were taking time to investigate the death of his brother, Tham, and bring the killers to book despite assurances that the matter would be investigated timeously.

When asked whether the case had been finalised, Matinde said: â€œNot yet; Far from it. We have not received any response from police on how far the investigations are.

â€œNo one has been arrested so far. Not yet. Not that weâ€™ve been advised by Milnerton Police, Cape Town, for this crime that happened on 19 July 2015, just over six months ago.â€

The discovery was made by his long-time girlfriend, Thandi Juliet Mabena, in the early hours of July 19.

Events surrounding the untimely and tragic death of Dr Tham have been mired in controversy with the family disputing Mabenaâ€™s narration.

When news about the tragic death broke out, mourners, friends and relatives were advised that he had died from a chest infection for which he was undergoing treatment.

According to reports, there was much consternation and uproar as other family members had already been advised that he had been found stabbed in the neck with a kitchen knife.

Information that emerged soon after Dr Tham was found dead suggested two stab wounds, not just one, and when asked for explanation by the relatives, Mabena is reported to have said it was a suicide.

Conflicting details surrounding the death of Dr Tham led to a major fallout with Thandi trying to rush the repatriation process of the deceased (to Harare) which she finally achieved within one week.

Relatives questioned why she was in such a rush to do so.

The media reported that the emergence of an erratic handwritten death certificate which was later rejected by Zimbabwean authorities raised suspicion.

When asked what was delaying the inquest, Matinde said: â€œOur lawyerâ€™s efforts to find out the current state of play have thus far been unable to specifically find out why, except to say investigations are still under way, and the autopsy pronunciation had yet to be made by the state.

â€œWe already had our private pathologist report commissioned on same the week of death. I shall comment at the right time about this as commenting now might interfere with police investigations.â€

The Matinde family launched a parallel and private autopsy after being upset by the pace of investigations.

â€œWe await an official autopsy pronunciation to see if that tallies with our private one, in which case swift progress can hopefully proceed,â€ said the former Radio Three broadcaster.

â€œThe police investigation is not the only one under way. There are parallel third party investigations both to do with the case, and circumstances surrounding what has happened since.

â€œWe cannot confirm whether we are happy with police investigations so far, as we donâ€™t know what is on their minds, and are reluctant to let on.

â€œThey are playing their cards fairly close to their chest at the moment, much to the frustration of friends and family, but the Matinde family does not and cannot determine the police timetable.â€

He said his family was looking forward to conclusion of the inquest.

â€œWe patiently await the results of their findings, but we are not just wiggling our thumbs waiting for that day, hence our own parallel investigations. I can comment about our initiatives, and to that end am very happy with the way they are progressing,â€ he said.

Mabena is said to have told the Matinde family that she was the one who discovered the body with stab wounds but denies ever hearing any groaning sounds or any other disturbances during the night.

Matinde said Mabena has not been of much help to the investigations.

â€œWe are yet to hear from her if she has also made any leads into this case since she is the one closest to where the tragedy took place,â€ he said.

â€œOne would have thought a straightforward explanation to relatives and responding to their understandable straight forward questions about the death of their loved one wouldnâ€™t need a go between, but she seems to think differently as hundreds of questions go unanswered or inconsistencies and concerns simply explained as they would be available right at her fingertips!

â€œUnfortunately, Thandi has not been very helpful with finer detail. She has just told the family that she is the one who discovered the body with stab wounds but denies ever hearing any groaning sounds or any other disturbances during the night. So she has not been of much help as she says she only discovered the cold body in the early hours of Sunday the 19th.
â€œThandi has not been very forthcoming with follow-ups on what happened on that tragic night, nor indeed is she communicating with us directly. She prefers the sanctuary of her estate probate lawyers, an arbitrary self-elected position I shall comment on fully at the right time.

â€œHow probate and â€˜homicideâ€™ questions can both be addressed by this one entity, the police are yet to explain to us. We await their response to that particular question.â€

He said there are still so many unanswered questions surrounding the death of his younger brother.

â€œI think until everyoneâ€™s role in my brotherâ€™s death is clearly and unequivocally explained, not just to the satisfaction of the investigators, but of the family as well, everyone who was in that house that night is still of interest and assistance to the police,â€ Matinde said.

â€œWe were advised that it was suicide but I would like to say the family is failing to believe this suicide version.

â€œThandi remains the only person who really knows what happened. She should also know that I can count on one hand with a finger or two left over, the number of people who entertain the suicide story.â€

â€œOne can commit a crime by omission or commission, and I would advise that all be told so that the innocent are completely exonerated, the finger of suspicion removed, and the course of law is not obstructed,â€ the former DJ said.

â€œShe personally advised me that there had been no break in at the house. Given the above, the family of course has many questions seeking answers from her, so we can all together help each other identify who took our loved one from our midst so prematurely and callously.â€

Matinde said his family will continue to pursue the matter.

â€œMy brotherâ€™s spirit may also not rest in peace until his living wishes are carried out to the letter, and justice is done,â€ he said.

â€œWe are hoping the police will finalise their investigations sooner so the family and Thandi can have closure on what really happened.â€

â€œI am not sure what to say to you other than that I am distraught with grief and have no comments for you,â€ she said in an emailed response to the Southern Times.
â€œMy husband was a very private person and I would like to respect that by not taking this painful loss to the media. I kindly request that you respect that too.â€