The MDC condemns in the strongest terms the arrest of Councilor Hamutendi Kombai, the Mayor of the City of Gweru. The arrest which comes barely a week after the High court ruling to reinstate him and the entire council back to their offices is clearly deplorable and downright irrational. This action typifies the perennial harassment of MDC elected officials by the faction-ridden of Zanu PF regime. 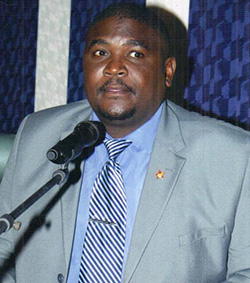 The wanton and blatant disregard of the rule of law to reinstate Mayor Kombayi as determined by the High Court is not only a sad indictment on the justice delivery system in Zimbabwe but it is also tantamount toÂ  a total disregard of the Constitution. It is clear that this is yet another attempt by the faction-ridden Zanu PF regime to divert attention from the pressing issues bedeviling this country.

That this arrest also comes after Mugabeâ€™s botched jaunt to India raises more eyebrows and betrays the Zanu PF regimeâ€™s tired and archaic tactics of hoodwinking the generality of Zimbabweans from the bread and butter issues that the crumbling regime has clearly failed to deliver to the people.

Any such attempts by the crumbling Zanu PF regime to prop up its waning fortunes will not only fail dismally but shall be resisted fiercely by the people of Zimbabwe. The yesteryear partyâ€™s stubborn reality of being fronted by a totally incapacitated 92 year old President will not be wished away by creatingÂ  fictitious court cases against innocent citizens.

Mugabeâ€™s dream to remain in power for life is certainly turning into a terrible nightmare as he finds himself trapped between the frustration of failing to bring order into his chaotic party and the reality of a crushing defeat in 2018. It does not need a rocket scientist to notice how lately Mugabe has come across as an incoherent, disoriented, rambling and tired old man who wants to remain President for life without any compelling national reason.

While Mugabeâ€™s irrational desire to remain in office for life by hook or by crook is unfortunate, it is utterly shocking to see that there are some people within his collapsing party, like Saviour Kasukuwere, who are desperate to force his re-election bid through foul means come 2018, including using harassment of citizens and wanton disregard of the rule of law.

The people of Zimbabwe will not accept to be abused and trashed by the insensitive and insipidly corrupt Zanu PF regime. The day of reckoning is nigh.