ZIMBABWE People First (ZPF) leader Joice Mujuru has challenged the coercive arms of the State to resist manipulation by the current Zanu PF-led government and adhere to the country's constitution which compels them to be non-partisan. 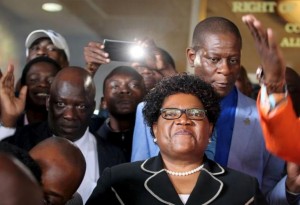 The former-ally-turned-rival to President Robert Mugabe was addressing her first press briefing at a top Harare hotel since her shock ouster from Zanu PF last year.

â€œWe urge all our War Veterans, the Police, the Army, the Air Force, and Intelligence services to defend the Constitution of Zimbabwe,â€ she said to a room packed with foreign diplomats and other individuals identified to be representing business, churches and civic groups.

“The army has a very important job to do; they have an immense responsibility. The army cannot talk politics like what we are doing in People First.”

The ousted VP is widow to the once respected retired army commander Solomon Mujuru who died in a mysterious inferno at a family farm house outside Harare in 2011.

Although yet to be proven, she is thought to have sympathisers within the country’s uniformed forces.

Mujuru promised to root out corruption and denied ever being involved in corruption crimes she was being given when she was dislodged from Zanu PF.

She also promised to form a government that will reverse the countryâ€™s deepening economic fortunes through her party’s newly crafted manifesto – Blueprint to Unlock Investment and Leverage for Development (BUILD).

Mujuru said her party respected the values of the countryâ€™s bitter liberation struggle whose legacy, she said, belonged to every Zimbabwean.

â€œWe fought for the right to self-determination, the right to freedom, the right to vote under the principle of one person one vote and NOT one â€œmanâ€ voting for us ALL,â€ she said, in a sarcastic reference to her former boss.

Mujuru said her new party â€œwill remove the unjust system once and for all through economic, political and social reformâ€.

â€œZimbabwe People First believes in a Zimbabwe where the civil service is apolitical, efficient, meritocratic, professional and transparent in its conduct,â€ she said.

â€œWithout these traits, we cannot BUILD a better Zimbabwe. We cannot bring about change and restore hope.

â€œThe effective civil service we shall assemble provides a basis for the vibrant economy we aim to BUILD.

â€œWe shall encourage and institute e-government throughout the service to achieve set targets by set timelines and curb corruption.â€

Mujuruâ€™s surprise entry into opposition politics has been met with scepticism by some of her critics who see her as a reforming version of an oppressive Zanu PF after her lengthy association with the ruling party.

Said Mujuru in unsolicited comments: â€œMy simple answer is that Zimbabwe People First is a new entity, with new values and followers from every political party in Zimbabwe, including those who had never joined any political party before, from every province and ethnicity.

â€œWe are the People and what brings us together, all of us, is our desire to transform and to BUILD a better Zimbabwe. We are not a one- simple woman party. What we are, is a party with a one People Centre of Power.

â€œI must also speak for myself. I have known only one political party since I joined the liberation struggle. I am now outside that party. I am neither an assassin nor a witch. This is now there for all to see.

â€œI have never been a pretender that is why you never heard me encourage or promote hate speech. If there is any crime that I am guilty of, it is the belief in the periodic constitutional and democratic renewal of leadership from within, and this is the same position I am now promoting within Zimbabwe People First.”

Mujuru refused to discuss President Mugabe’s leadership qualities saying, “I donâ€™t want to be dragged into discussing persons but bread and butter issues.”

She also said she did not harbour any ill feelings against her tormenters.

In the next coming months, she said, her party will call for its inaugural Elective Peopleâ€™s Convention to usher in substantive leadership to all positions within the party, from the Ward to the National level.

She denied being involved in any formal talks with other opposition parties to form a pre-election coalition pact against Zanu PF but said she was open to such.

Former Zanu PF personalities such as Ibbo Mandaza and Major Kudzai Mbudzi were also spotted among those who attended the conference.

Dozens of her supporters gathered outside Meikles Hotel to catch a glimpse of the Presidential aspirant.