THE head of the civil service commission (CSC) has blamed ministers for bloating the governmentâ€™s wage bill which is taking more than 80 percent of revenues, forcing the cash-strapped treasury to delay salaries. 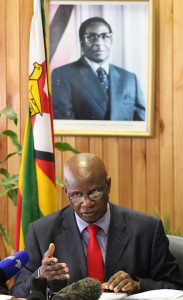 Government reportedly employs around 500,000 workers and Finance Minister Patrick Chinamasa has failed to convince cabinet to retrench as he struggles to cut the wage bill which he describes as unsustainable at 82 percent of the national budget.

However, CSC boss Mariyawanda Nzuwah, this week told Parliament that ministers were also to blame for the huge government staff establishment.

Nzuwah said each new minister appointed by President Mugabe demanded to come into the job with their own staff.

â€œThe other day, I was ridiculed by President Mugabe that I am the one who is responsible for the bloated civil service,â€ Nzuwah told legislators.

â€œThe President said he only appointed ministers, deputies and permanent secretaries and it is myself who employs the rest of the civil service. But the problem is, once a minister is appointed, he wants to bring his own staff.â€

He added: â€œI have had phone calls from ministers including provincial affairs ministers.

“There are 10 and they would come to you and say, â€˜I was appointed by the President and I want a personal secretary, I want a director or deputy director to coordinate activities in the province so that I can effectively discharge my dutiesâ€™.

â€œIf you tell them that it is the role of the district administrator, they will tell you that DAs belong to (former Minister of Local Government, Public Works and National Housing, Ignatius) Chombo, or (Saviour) Kasukuwere (the present Minister).â€

Chinamasa recently told the IMF that he planned to reduce the public sector wage bill from 82 percent of government spending currently to 52 percent of expenditure by 2019.

The minister told a visiting IMF delegation that the government would â€œenter into a process of a staggered progressive reductionâ€ to meet the 2019 target.