Embattled Vice President Emmerson Mnangagwa recently pledged to construct a new Gweru-Zvishavane tarred road which will bypass Boterekwa route. This has drawn criticism from opponents who said such a project in a drought-stricken area would upset the starving rural population. 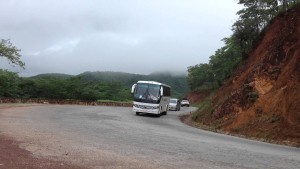 A close ally to the beleaguered VP confirmed the development saying the proposed road would pass through Dorset and Zhaugwe resettlement areas.

However, the source was reluctant to shed more light on the issue of funding and when the project will start.

A prominent political analyst in the Midlands province lashed out at the project and labelled the VP as someone only seeking political sympathy from the very same people he abandoned for the more than 30 years he has been in the government.

â€œThis man (VP) is just seeking political sympathy now. Where was he all along? He was in cabinet since independence, but he has done nothing – why now? Simply because his political career now hangs in the air he wants Midlanders to sympathize with him,â€ said the analyst. He added that the VP has also vowed to construct a bridge at Gwesheche River were school children are finding it hard to cross the river during the rainy season.

Efforts to get a comment from the VP were fruitless as he could not be reached.

A war veteran speaking on behalf of Zhaugwe community said despite all the criticism the VP was suffering right now they were in full support of his projects as their appeal for construction of the bridge to the corporate had borne no fruit.

â€œThe situation at the river is unbearable especially when the river is flooded. Pupils spend even a week without going to school,â€ he said.