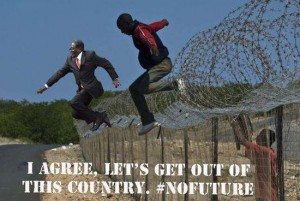 Prosecutors didn’t think the spoof was funny. A printed screenshot of the image is now a key piece of evidence in the trial of the school headmaster who posted it and faces a year in jail if convicted of insulting the longtime leader of the southern African nation.

Edson Chuwe, headmaster of government-run Shamva Primary School, is not the only one to run afoul of Mugabe, who has sparred with the West over his government’s human rights record. A local non-governmental group, Zimbabwe Lawyers for Human Rights, says it has represented over 150 people charged with insulting Mugabe since 2010, though many cases were dropped.

Poking fun at Mugabe is a risky business in Zimbabwe, which has a law that forbids “undermining the authority of or insulting the president”.

In Chuwe’s case, the charge sheet says the edited picture suggests Mugabe and Rihanna were “in a position suggesting that they were in love”.

Lenman Pwanyiwa, a member of the development committee of the school where 42-year-old Chuwe presides, was also arrested for clicking “like” in a Facebook response to the image.

On Tuesday, a magistrate removed the case from the court roll and advised police to summon the duo to court when ready for prosecution. The school where they work is northeast of Harare, the Zimbabwean capital.

“It’s a joke,” said Dzimbabwe Chimbga of Zimbabwe Lawyers for Human Rights, which is defending Chuwe and Pwanyiwa and has approached the Constitutional Court in a bid to scrap the law that says insulting the president is a crime.

“Freedom of speech means citizens have a right to criticise and even poke fun at political leaders. It is ridiculous to criminalise such actions,” Chimbga said.

Vice President Emmerson Mnangagwa, who is also justice minister, has defended the law as necessary to prevent “the breach of public order and public safety”.

“The office of the president, as headed by him personally, may be diminished if the head is savaged falsely,” Mnangagwa said in an affidavit submitted to the Constitutional Court in response to the 2013 challenge, which has yet to conclude.

Meanwhile, more people are being charged.

A recent case involves Tompson Mloyie, a policeman who appeared in court on Tuesday in Harare. He told colleagues that, “Mugabe is too old to rule and he married a prostitute”, according to the charge sheet.

Mugabe’s wife, Grace Mugabe, has increased her political profile and is a player in factional battles within the ruling Zanu-PF party, some of whose members are jockeying for influence ahead of an eventual leadership succession.

In another case, Zimbabwean Moenda Mbera is due in court on May 16 for allegedly telling companions that ruling party supporters are thin because of Mugabe’s purported mismanagement. Zimbabwe’s economy is struggling; unemployment is high and many businesses have closed.

Over the years, opposition figures and others have been charged for calling Mugabe a goblin, a rotten old donkey and a homosexual. Prosecutors withdrew charges in most cases after failing to establish an offence, said Chimbga from Zimbabwe Lawyers for Human Rights.

Police and prosecutors have been warned against flooding courts with such cases. In 2013, Deputy Chief Justice Luke Malaba of the Constitutional Court said police and prosecutors were doing more damage to Mugabe’s reputation by bringing “beerhall talk” to the courts, where the cases attracted media coverage.