A ZRP officer attached to the Police Reaction Group who was arrested for allegedly calling President Robert Mugabe an old man has applied for referral of his case to the Constitutional Court. 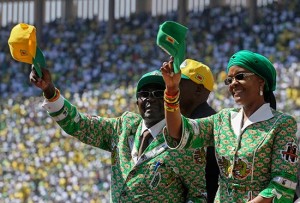 Too old to rule? … President Robert Mugabe and wife Grace

Thompson Joseph Mloyi, 44, who is based at Craneborne barracks, told a Harare court Tuesday that he has the right to express himself without being prosecuted.

He is charged with undermining the authority of or insulting the President.

â€œSection 51 of the Zimbabwean constitution deals with freedom of expression,â€ he said.

â€œThis is protection under which people communicate ideas. These ideas can legitimately include criticism of the president and his decisions,â€ he added.

The cop is also accused of calling the First Lady, Grace Mugabe a prostitute.

Allegations against him arose on morning of March 5 when he entered one of the barracks at Craneborne camp. The other officers were preparing for work.

Mloyi is claimed to have started shouting that â€œPresident Robert Mugabe is too old to rule and is married to a prostitute.â€

Court heard that other officers who were present confronted him and he stormed out of the barrack and went away.

The other police officers filed a report at Harare Central leading to Mloyiâ€™s arrest.