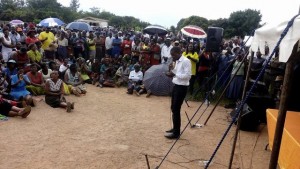 Hordes of youths reportedly from Mbare descended on the open space where the meeting was to be held, throwing stones and injured scores while some car windows were smashed.

She was kicked out of Zanu PF along with other senior leader late 2014 and they have now coalesced to form an opposition party tipped to give President Robert Mugabe’s ruling party at elections in 2018.

The interim leader and other top party officials did not attend the rally.

“At least nine people were arrested after our youths chased them down. We understand they came from Mbare and began throwing stones.

â€œWe are not going to be intimidated. There is no stopping. Zimbabwe needs change and now,” said a ZPF youth coordinator who declined to be named.

Some of the injured youths had deep cuts and were taken to hospital. The attack was repelled by police before they picked up some of the attackers.

ZPF spokesperson Rugare Gumbo condemned the attack but was quick to say they expected it.

“We condemn such barbaric acts in the strongest terms. It should never be allowed. This is a modern society and people should be able to express themselves without coercion,â€ said Gumbo.

“Zanu PF is violent and for us it is the way of the struggle. We have said, and will continue to say it, we are a non-violent party and we want to be allowed to hold our programs peacefully.â€

The incident lasted only a few minutes as police quickly intervened, witnesses told Associated Press. Police detained one of the minivans but the occupants fled the scene.

ZRP spokesman Charity Charamba said she could not comment as the incident had not been reported.

Jim Kunaka, a former Zanu PF official who has joined Mujuru’s party, said he identified some of the assailants as his former party members.

The ruling party’s spokesman could not be reached for comment.