Heal Zimbabwe on 16 March 2016 conducted a public meeting on the National Peace and Reconciliation Commission (NPRC) in Masvingo at Mucheke Community hall. The meeting was held in partnership with the Community Tolerance Reconciliation and Development Trust (COTRAD). 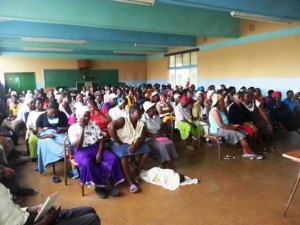 ItÂ  was aimed at soliciting public views on the recently gazetted NPRC bill and to enhance peopleâ€™s knowledge so that they participate positively during the public hearings on the bill to be conducted by the Parliamentarian Portfolio Committee on Peace and Security next month.

The public meeting was attended by 180 members of the public drawn from in and around Masvingo province. Among the panelists were Reverend Zenda from the Christian Voice International Zimbabwe (CVIZ), Zivanai Muzorodzi from COTRAD, Cleto Manjova from Heal Zimbabwe and Advocate Martin Mureki.

Various issues were raised by the presenters regarding the content of the bill. In his presentation, Advocate Martin Mureki, unpacked in simple and understandable terms, the NPRC bill. He highlighted that the bill gives too much powers to the Minister in charge and this poses a threat to issues of fairness and transparency in the work of the NPRC. He also noted that clause 8 (7) of the bill gives the Minister power to stop disclosure of evidence by issuing out a certificate. This greatly compromises the independence of the Commission from interference and opens it to manipulation.

Reverend Zenda from the Christian Voice International Zimbabwe (CVIZ)Â  presented on the important role the church plays in facilitating healing and reconciliation. He noted that the church has a huge responsibility of praying for peace and healing in communities. He further states that the church also offers counselling services, which is vital for healing, reconciliation and forgiveness.

Participants were alert to note that the bill falls short in meeting the expectations of the survivor. â€œ…I am a survivor of political violence from 2008, where do I get the resources for legal assistance and bus fare to travel to the NPRC offices to report my case? The bill doesnâ€™t even mention or make a provision for that….â€, lamented one participant. This is evident that the bill is silent on decentralising the NPRC services. Ideally it is suppose to establish provincial and districts centres accessible to the most remote survivors of human rights violations.

The bill was also dismissed on the grounds that it leaves so much power in the hands of the Minister. Participants also expressed concern over the administrative work of the Commission which gives the Minister power to appoint civil servants to work as secretariat of the Commission. This would eventually create a commission that is not transparent and fair in the discharge of its constitutional obligations.

Participants also highlighted the lack of seriousness by the NPRC to raise awareness on the bill and yet intend to get views on the bill from the public. â€œ…We are grateful to organizations like Heal Zimbabwe, which have taken it upon themselves to educate us on the bill, this should have been done by the NPRC itself….”, said a participant from Mucheke suburb.

Other members present also expressed concern over the fact that the NPRC has remained domiciled in Harare and has not set up offices in all provinces for easy access. This has isolated their interactions with the Commission. Participants also questioned why even after the swearing in of the Commissioners to the NPRC, the Commission has remained dysfunctional. They expected the Commission to immediately commence its constitutional obligation of receiving and considering complaints from the public and take necessary action.

The public meeting come at a time when Government has gazetted the NPRC bill which is a bill that regulates the operations and functions of the NPRC. The public meeting in Masvingo is one among many public meetings on the NPRC that Heal Zimbabwe is conducting in all the provinces of Zimbabwe under the campaign #Participate to Heal Zimbabwe/NPRC. The campaign is meant to gauge the preparedness of the country to spearhead a genuine, Â transparent and meaningful national healing and reconciliation process. The findings shall feed into the organization’s advocacy and lobby strategy with all relevant stakeholders involved in the transitional justice process.