Harare â€“ Some survivors of political violence in Zimbabwe have slammed the Zimbabwe Republic Police for assisting Zanu PF supporters in perpetrating violence against opposition party supporters during elections in the country. 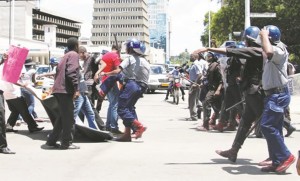 Narrating their ordeals at a ceremony to commemorate the International Day for the Right to Truth concerning Gross Human Rights Violations and For the Dignity of Victims which takes place on Thursday, the victims said the police were complicit in the perpetration of violence as they let Zanu PF perpetrators go scot-free even where there was overwhelming evidence.

The commemorations were organised by the National Transitional Justice Working Group Zimbabwe in conjunction with the Counselling Services Unit.

â€œMy question is where is the justice when those who killed my relatives are still free and boasting about it. When will the justice prevail and for who? Our new constitution says a lot about protection of peopleâ€™s rights but there is nothing that has been done to pacify those whose rights have been trampled upon,â€said 46-year-old Graham Nyahada, whose father was killed by known Zanu PF supporters in Mvurwi.

Nyahada said the police force was political and lacked professionalism, adding that some of the police officers were assisting Zanu PF members and supporters with lists of the people they put on their hit lists, which he said was victimisation of the people by those who should be protecting them.

â€œWhen you are assaulted by a Zanu PF supporter and you report to the police, they will instead detain you for days on end when you are supposed to be the complainant. Just like what happened to me, my father was killed by known people but they sought other means to silence me,â€ he said.

He said the Zanu PF government, led by President Robert Mugabe, was turning a blind eye to political violence while they lied to the world that Zimbabwe was a peaceful country, adding that nothing was being done to ensure those victimised got justice.

â€œHe tells the world that Zimbabwe is a free and peaceful country, but where is the peace when people are disappearing every day. Not a year passes in Zimbabwe before we hear of a new disappearance, so we donâ€™t see how we can be said to be a peaceful nation, it is just paying lip service,â€ he said.

Another survivor, Ellina Zekias of Bindura, whose mother was burnt alive by Zanu PF supporters in 2008, said the police had refused to give them a report for her mother to access treatment at Bindura Hospital and did not even open a docket although the perpetrators had been positively identified.

â€œWe were ferried by police to Bindura Central Police station where they did not record any statement or open a docket. They then drove us to Bindura hospital and when we got there, the late Elliot Manyika (former Zanu PF MP for Bindura) came and said that my mother should not be treated at the Bindura Hospital but should seek treatment in Britain. I donâ€™t know when justice will prevail for my late mother, if ever it will,â€ she said.

Aniko Chikuvanyanga Midzi, whose son Trymore was murdered in Bindura, said the police had ignored his plea for help when his son was being beaten by the Zanu PF militia at a bar in Chipadze, where they had established a â€œcellâ€.

He said his son had managed to give police the names of the people who had attacked him, but no arrests had been made up to now.

Midzi said while his sonâ€™s body lay in state in his house awaiting burial, he was arrested by the police for no apparent reason, only to be released after spending a night in the cells.

Midzi also lost his son-in-law who was found murdered days after the death of Trymore.

A 74-year-old Gokwe villager, whose son was murdered before his body was taken away, broke down while giving her testimony.

She said she never got to know where the body of her son was taken to, adding that the police had never bothered to investigate his whereabouts.

The United Nations General Assembly proclaimed 24 March as the International Day for the Right to the Truth concerning Gross Human Rights Violations and for the Dignity of victims to pay tribute to the memory of Archbishop Oscar Arnulfo Romero, a prominent Catholic priest in El Salvador who was shot dead while celebrating a mass at a chapel of the cancer hospital where he lived.

A day prior to his killing, he had made the following appeal to armed forces in the country: â€œBrothers, you came from our own people. You are killing your own brothers. Any human order to kill must be subordinate to the law of God which says â€˜Thou shall not killâ€™. No soldier is obliged to obey an order contrary to the law of God. No one has to obey an immoral law. It is high time you obeyed your consciences rather than sinful orders. The church cannot remain silent before such an abominationâ€¦in the name of God, in the name of this suffering of people whose cry rises to heaven more loudly each day, I implore you, I beg you, I order you: stop the repression.â€