The Peopleâ€™s Democratic Party (PDP) welcomes the proposed establishment of the Land Compensation Fund (LCF) which seeks to attract resources for the compensation of commercial farmers whose properties were repossessed during the disastrous ZANU (PF) fast track land reform project of 2000. 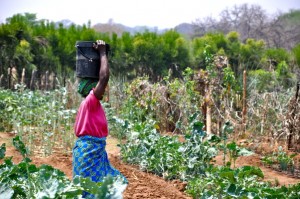 According to the LCF memorandum tabled in parliament, the main objective of the fund is compensation and the second objective of the fund is to enhance agricultural productivity on allocated land.
In our economic policy document Holistic Program for Economic Transformation (HOPE) we have identified agriculture as one of the key enablers for economic recovery, not only to achieve food security, but to create jobs and sustainable incomes for our rural population so that they can have a better quality life.

There is no question that agricultural recovery will also have a knock-on effect on the rest of the economy. It will directly lead to the revival of our food processing industry which historically relied on 60% of its inputs from the agricultural sector and employed millions. Historically in Zimbabwe, one dollar invested in the agriculture sector resulted in four dollars being invested in related industries and that is still the case and then some. The conflict on land ownership therefore needs to be resolved first in order for us to re-establish the value of our land assets and attract more investment in the economy as a whole.
There are an estimated 4,500 commercial farming businesses with about 5,300 properties whose ownership is disputed and who require compensation. The total value of estimated compensation for land and fixed assets only, is estimated to be between $7 and $10 billion.

In our opinion, the land compensation framework must take into account the compensation for land and improvements including the consideration of such issues as land valuation methodologies and mechanisms, land price information, the basis of levels of compensation to be paid for land and associated property acquired, interest payable and possible institutional responsibilities. Once these are resolved, compensation can then be agreed upon and paid.

If we assume that the value of the assets involved are as much as US$10 billion, this will mean that when these funds are released into our economy, they will trigger off significant macro-economic recovery which will include:

1. An increase in liquidity in the banking sector;
2. Re-establishment of an active market for land in rural areas with an increase in bank lending to agriculture and related industries;
3. An increase in local private investment capital in general;
4. The strengthening of property rights in the wider economy;
5. Create further investment in infrastructure and utilities development;
6. Unleash a multiplier effect leading to industrial recovery; and
7. Trigger off new employment creation in the whole economy.

Above all, will be the positive impact on the economy due to the confidence that can be created. This will lead to an increased inflow of foreign investment capital in the all sectors of the economy once we repeal indigenisation, promote economic freedom and improve the ease of doing business in Zimbabwe. A resolution of the crisis over land in Zimbabwe with the payment of fair compensation will definitely help restore normal relations with the international community.

In resolving this process, we demand a transparent and fair process. As PDP, this, of course, remains our greatest fear given the history of ZANU (PF)â€™s inability to administer large funds.

The Land Compensation Fund proposes the establishment of a management committee by the responsible minister and in our view, that committee should be made up of experts, farmer representatives, professionals and other affected parties who are all objective and non-partisan. Its activities must also be transparent and there must be accountability to parliament. Except we do this, we are most likely to end with another ZANU (PF) slush fund that can be abused.

In our view, unfortunately the risk of ZANU (PF) appointing party cronies is very high and this will inevitably increase the risk of mismanagement, corruption and fraud as has happened in the past with other large funds such as the aids levy, disability fund and our social security funds. We must avoid that at all costs.

In addition to resolving the compensation issue, it will also be necessary to establish a new dispensation in the agriculture sector. This new dispensation must rationalise the issue of land ownership and tenure to ensure equitable and fair distribution of this national asset. However, that rationalisation must be underpinned by productive use of land assets so that we reinstate the value of land on Zimbabweâ€™s balance sheet and attract new investment in that sector.

As PDP, our view is that this second objective is too broad, too vague, fails to avoid any doubt on what the funds will be used for and is therefore subject to misinterpretation and abuse.

The issue of compensation therefore should be a once off event where the funds should be ring-fenced and once compensation is complete the fund should be disbanded. This will prevent any future abuse of the LCF and limit the likelihood of mismanagement and misappropriation.