RUSSIAN officials said on Saturday that a passenger jet crashed in southern Russia with all 55 passengers and six crew on board believed to have been killed. 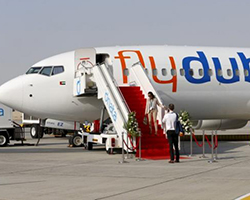 A Flydubai plane is pictured at the Dubai Airshow in this November 8, 2015 file photo

The aircraft had to abandon an initial attempt to land and came down while making a repeat attempt, according to a ministry statement.

An official from the investigative committee, a state body that routinely investigates major incidents, told Reuters from Rostov that “according to preliminary information” everyone on board the jet had died.

Most of the passengers on board were Russian, the regional governor said on television.

“Three foreigners were on the passenger list of the plane, but that information needs checking” an emergency ministry official said on Rossiya-24 news channel.

Dubai-based airline Flydubai said on Saturday that it was investigating an “incident” regarding one of its flights to southern Russia.

“We are aware of an incident involving our flight FZ981 from Dubai to Rostov On Don. We are investigating further details and will publish an update once more information is available,” the budget carrier wrote on its official Facebook page.