Maputo (AIM) â€“ The Mozambican police on Monday raided a house in the outer Maputo neighbourhood of Luis Cabral where they discovered a wide range of weapons, uniforms and communications equipment. 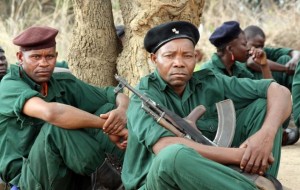 Maputo police commander Bernadino Rafael told reporters he believed that it was from this house that the actions of criminal gangs armed with machetes had been planned and coordinated.

â€œThis house was the logistical base for criminals destabilizing neighbourhoods such as Maxaqueneâ€, he said.

According to the report in Tuesdayâ€™s issue of the Maputo daily â€œNoticiasâ€, among the equipment seized were green uniforms similar to those worn by members of the illicit militia of the rebel movement Renamo, as well as uniforms and other gear that seems to belong to the private security company G4S.

â€œWe are concerned that the equipment found is mixed with uniforms identical with Renamo uniform, as well as G4S uniformsâ€, said Rafael. He added that the police have asked G4S for an explanation.

Renamo uniforms and propaganda material suggest there may be a link between Renamo and the Luis Cabral house. Rafael recalled that when a group of criminals wielding machetes was recently arrested in Maxaquene, one of them turned out to be a Renamo member.

The owner of the house has gone missing, and the police are looking for him. They want to question him about the origin of the material found in the house.

Rafael said the police raided the house after receiving a tip-off. He urged members of the public to raise their level of vigilance.