SELF-PROCLAIMED revolutionary and President Robert Mugabeâ€™s US based faithful, Coltrane Chimurenga, says he is planning a â€œpropagandaâ€ campaign against US presidential contenders, Hillary Clinton and Donald Trump, for their tough stance against the Zimbabwean leader. 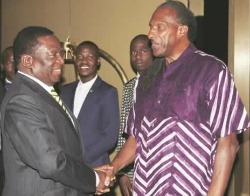 Born Randolph Simms, the 55 year-old founder of the radical December 12 Movement is currently in Zimbabwe, his late parentsâ€™ birth place and will soon return to his childhood base in New York to wage the campaign.

Cde Chimurenga, as he is affectionately known within Zanu PF circles, describes the 92 year-old Mugabe as a rare pan-Africanist and revolutionary who can be compared to Cubaâ€™s Fidel Castro and other world leaders who have refused to be bullied by America.

His December 12 Movement, a US platform for demanding civil rights, has been invited to past Zanu PF conferences, and is often granted the status of a liberation movement.

Chimurenga said he and other like-minded black Americans were planning a spirited campaign against Trump and Clinton whom he said had no plans to uplift blacks.

The firebrand civil rights campaigner said he was also fighting against two contenders for their hard line stance against President Mugabe, who is on the US sanctions list for rights abuses on his people.

“If Donald Trump or Hillary Clinton becomes president, it means black people are finished…they will not have any human rights, not to mention civil rights, it would be the worst conditions ever,â€ Chimurenga said in an interview with NewZimbabwe.com this week.

Chimurenga accused Clinton of co-authoring the Zimbabwe Democracy and Economic Recovery Act (ZDERA) of 2001 which imposed a travel embargo on President Mugabe and his inner circle.

The controversial law also barred American firms from entering into any form of business deals with black listed individuals and Zimbabwean firms.

Trump is also known for his radical views.

The US presidential polls, due later this year, pit a number of candidates against each other but Donald Trump of the Republican party and former First Lady Hillary Clinton from the Democrats are front runners.

Chimurenga said he and some members of his movement were putting up a strong campaign in the US to try and dissuade black Americans from voting for Clinton and Trump.

Short of that, Chimurenga said, oppressed blacks were supposed to use their decisive vote to demand elusive rights from the two White House contenders.

“So, in the two candidates, you have two extremes, one in Hillary Clinton and the other in Donald Trump and, therefore, based upon those extremes you have a situation of who is going to go for the black vote.â€