MUTARE - After living on one of the worldâ€™s richest diamond fields, John Chirasikaâ€™s hopes of becoming a rich man have been turned into nightmares as it has become imminent that he might not receive compensation from the state-linked mining companies that relocated him and other families in May 2011. 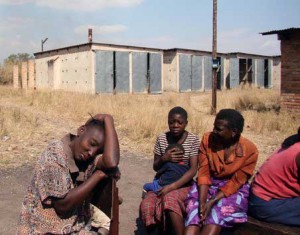 Pondering the next move the displaced villagers at Arda Transau.

Chirasika and his family is part of over 800 families that were relocated to pave way for diamond mining in Chiadzwa. The families were resettled at ARDA Transau farm in Odzi. Each displaced family was allocated a 3-bedroomed house, 11hectares of arable land including 1 hectare earmarked for irrigation and a once off US$1 000 disturbance allowance.

According to the government evaluators, each family was supposed to get US$40 000 as compensation.
Itâ€™s now five years down the line, the families have not received any compensation. To add, the government recently ceased operations of nine diamond companies following their failure to renew their
licenses.
It is against this background that government will centralise its oversight in the exploitation of diamonds by merging all diamond players in the newly formed Zimbabwe Consolidation Diamond CompanyÂ  (ZCDC).
â€œI was better off when I was at my homestead in Chirasika village. I used to have everything and life was good for me and my family. But, look at me now, my life has changed to the worse. I am now poor and I will die poor,â€ said a visibly emotional Chirasika. â€œThey (mining companies) promised to compensate us but now we hear the companies have been told to cease operations and it means that we will not get our compensation money,â€ he added.
It is the same story for Given Muzanechita and hundreds others. â€œWe were just dumped here (Arda Transau). I left my traditional home and I was relocated here for nothing. They talked about compensating us but this will not come to pass as we will not get our money from these companies,â€ he said.
Traditional leaders in Marange are fuming over the failure by diamond companies to compensate villagers who were relocated from mining areas to Arda Transau in Odzi. The traditional leaders who include Hebert Garahwa said they now wanted an audience with both President Robert Mugabe to discuss the villagersâ€™ concerns.
Garahwa said diamond mining companies have not been forthcoming in compensating the affected families despite repeated promises to do so. â€œWe have exhausted all the channels regarding the compensation but nothing has come our way. The mining companies have been very stubborn. Â Now that the companies have been told to cease operations it means the villagers will not have their compensation. We are now appealing to the President to intervene,â€ said Garahwa.
He accused some of the mining companies of obstructing attempts by villagers to meet with Mugabe claiming that some of the diamond miners had threatened villagers and traditional leaders with unspecified action, claiming that they were â€œcloseâ€ to Mugabe.
Zimbabwe Environmental Law Association (Zela) director Mutuso Dhliwayo said the government had the obligation to ensure that the â€œevictionâ€ of communities and their subsequent relocation was done in a manner that did not negatively affect their rights. â€œCommunities own land. The relocation of families where mineral resources like diamonds are found should be done in a manner that does not affect the villagersâ€™ rights before, during and after the relocation process,â€ he said.
The acting director of Centre for Research and Development (CRD, James Mupfumi said the people of Marange have a legitimate right to claim compensation. â€œThe villagers have the right to claim compensation from mining companies for forced displacements and environmental degradation. The government is in complicit by disregarding this legitimate expectation,â€ he said. â€œThe government should now institute a consultative forum for all stakeholders in which the legitimate submission of the forcibly removed and uncompensated peoples of Marange would be tabled and considered in the proposed new structures,â€ Mupfumi said.
He said they were saddened by the Minister of Mines Walter Chidhakwaâ€™s failure to institute a consultative forum for all stakeholders in which the legitimate submission of the forcibly removed and uncompensated peoples of Marange would have been tabled and considered in the proposed new structures of the mining mergers.
â€œThe companies have not honored their pledges and government is complicit in disregarding the legitimate expectations of the people of Chiadzwa. Nothing in the ongoing reforms spells out progress in addressing the needs of the displaced,â€ Mupfumi explained. He noted that the Zimunya/Marange Community Share Ownership Trust has been a sham, with very little to nothing of note getting into the hands of the said beneficiaries.
The mining companies have been accused of lying to Mugabe for when they sold a dummy by presenting a cheque for $1,5 million to him during the colourful launch of the Zimunya/Marange Community Share Ownership Trust in 2012. Five companies pledged to pay $10m in the trustâ€™s coffers, but up to date, only two companies, Mbada Diamonds and Marange resources, have remitted $400 000.
Post published in: Featured