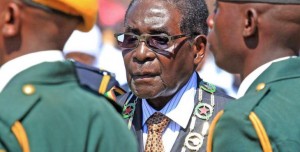 Southern African politics is an often rambunctious affair, far removed from the predictable and safe parameters of the established Anglophone democracies.

Itâ€™s a bit like being thrown into the spin dryer with a sack of razor blades. One accepts there are going to be nicks and cuts, with an outside chance of some major bloodletting.

Human rights lawyer and politician David Coltart, who is in South Africa promoting his historical autobiography, The Struggle Continues: 50 Years of Tyranny in Zimbabwe, knows this better than most.

Some of his comrades in the Movement for Democratic Change, of which he was a co-founder, disappeared and presumed murdered. He himself was harassed, jailed and has been the target of death threats, kidnapping and assassination attempts.

To endure such travails takes uncommon personal courage and faith. That faith might be secular, a deeply held ideological conviction of the kind that buoyed many in the liberation movements during South Africaâ€™s Struggle. Or it might be religious faith.

Although there is nothing preachy about Coltart or his book â€“ which is not only a searingly honest description of his political journey from being a typically gung-ho white Rhodie, but also a detailed, riveting chronicle of Zimbabweâ€™s descent into despotism â€“ he makes it clear it was his Christian faith that inspired his actions and sustained him. So Coltart dug in for the long haul, perhaps little realising how long it would end up being, whereas most prudent whites left Zimbabwe and headed for greener pastures.

Since a similar Rhodie-style sidling towards the exits afflicts white Saffers, the question is obvious. How do whities â€“ indeed, any minority bereft not only of the â€œcorrectâ€ proportion of melanin but also faith and ideology â€“ deal with an empowered and sometimes embittered black majority?

The greatest threat, said Coltart in an interview, is minorities doing everything possible to maintain their comfort zones by retreating into social laagers. â€œEngagement with your fellow citizens is necessary because without it our disconnected thinking and complacency is never challenged.

â€œOne must accept there will always be populist groups that try to delegitimise the participation of other groups in politics and broader society. In Zimbabwe it was not only about whites but about any grouping that posed a threat to Zanu-PF, which was then marginalised. It is readily forgotten or not realised by outsiders, that the Zimbabwe conflict has never been simply a black on white one and that blacks have suffered far more under (President Robert) Mugabe than whites ever have.

â€œEven the seizure of the white farms had less to do with addressing land issues than it had to do with rendering mute the farmworkers, the only black people in rural areas who were not dependent on Zanu-PF patronage.

â€œItâ€™s in any case a mistake to think most of oneâ€™s fellow citizens will fall for that kind of exclusionary rhetoric.

â€œBut that said, it depresses me as a regular visitor to SA how the critical mass of whites to this day fail to understand the role they played in oppression, as well as the privilege they retain. Itâ€™s as if they were anaesthetised by Nelson Mandelaâ€™s reconciliatory stance.

â€œAnd the growing pains will continue. SA remains in transition, with a long road to be travelled in terms of transformation.

Minorities need to make themselves indispensable to that process, using the fruits of privilege to improve the lives of the vulnerable.â€

Coltart scoffs at those who posit that SA will inevitably trace the same orbit into decline and authoritarianism as Zimbabwe. â€œThe critical difference is the war â€“ the military conflict in SA was just never as intense as it was in Zimbabwe. There just isnâ€™t the same legacy of anger.â€

He points also to the depth of democratic institutions in SA. Civil society, the trade unions, the universities, the media and the justice system are all stronger in SA after 22 years of democracy, than they ever were in Zimbabwe. â€œThere is not as much latitude in SAâ€™s political system that can be exploited by a tyrant.â€

The Zimbabwean story for the past 50 years is one of human resilience in the face of successive murderous governments, indifferent to the privations of its own people. As Coltart puts it: â€œRhodes begat Smith and Smith begat Mugabe.â€

So why should it change now? Coltartâ€™s final chapter heading gives the answer: â€œEndurance inspired by hope.â€

Coltartâ€™s The Struggle Continues is published by Jacana.

** The views expressed here are not necessarily those of Independent Media.