Worth thinking about now 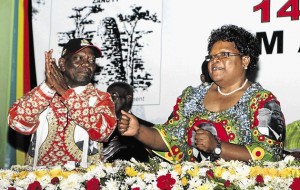 Before Joice Mujuru, Didymus Mutasa and Rugare Gumbo start talking about their People FIRST, they should tell us what happened to the following people who died for opposing them and their earstwhile friends in Zanu PF.

1. Alphonso Plaxedes of Dzivarasekwa, Harare was killed on 10 June 2003.

2. Andoche Julius, a farm foreman was shot and killed on 20 April 2000 by Zanu PFmilitia.

3. Bakari Besta was beaten to death by Zanu PF youths at Stodart Farm in Shamva on16 May 2008.

4. Bakacheza Joshua, an MDC driver was abducted by State security agents in Masasa, Harare on 25 June 2008. His decomposing body was on 5 July 2008 in Beatrice.

6. Bashitiwayo Moses died after he was assaulted by Zanu PF youths in April 2008.

7. Botha William was murdered by purported war veterans on 23 July 2000 in Marondera.

8. Newman Bhebhe was murdered in February 2002 in Nkayi, Matebeleland North.

9. Solomon Bote was beaten to death by Zanu PF youths at Musikavanhu Village inMakoni on 17 April 2008.

10. Butao Peter Tom died after he was severely assaulted by Zanu PF militia in Mudzi North constituency on 28 April 2008.

12. Bvumburai Paul of Shamva was murdered by Zanu PF youths in 2002.

14. Chacha Augustus, an MDC activist, was found dead in a dam in Shurugwi on 10December 2001 after he had been abducted by Zanu PF youths.

15. Chakwenya Tinashe was murdered in Marondera on 4 April 2000.

16. Chakwenya John was beaten to death by Zanu PF supporters on 2 July 2001 in Epworth, Harare.

17. Chaitama Nicholas an MDC supporter and farm worker was murdered in Kariba on 25 April 2000. He was abducted with eight other MDC members by a Zanu PF mob ledby Rex Chikwana which took them to Charara Estate. The ZANU (PF) militia. His bodywas later found dumped in Nyamhunga Township.

18. Chakwenya Tinashe was murdered in Marondera on 4 April 2000.

22. Chatunga Richard an MDC activist, died on Sunday 27 January 2002 in Buhera from injuries sustained after being attacked by Zanu PF thugs.

23. Chibika Tatenda, an MDC supporter died on 17 April 2008 after a purported war veteran, Richard Makoni shot him at Chibeta Business Centre in Mutoko.

24. Chipiro Dadirayi an MDC activist from Chikowore Village in Mhondoro-Ngezi, died on 5 June 2008 after being attacked by Zanu PF youths. They cut off her hands and feet before burning her alive inside her house. A vehicle owned by Bright Matonga, a Zanu PF MP in the constituency was used in the brutal attack.

25. Chemvura Lameck, a University of Zimbabwe student, died on

26. Cheu Shepherd a headmaster in Mutoko was abducted on 3 June 2008 by a Zanu PF and later found dead with one eye and genitals missing.

27. Chibvamudeve Nikoniari an MDC activist was murdered on 21 September 2002 in Mashonaland West.

29. Chigaga Chrispen Chimusoro died on 5 July 2008 after being brutally attacked by Zanu PF members in Mhondoro.

30. Chigagura Zeke was fatally assaulted by people chanting Zanu PF slogans at the Kahobo Business Centre and dumped his dead body in front of the house of the MDC candidateâ€™s campaign manager.

32. Chijeke Chrispen an MDC supporter died on 20 July 2000 in Gokwe after being assaulted by a Zanu PF mob.

33. Chiutsi Chrispen an MDC activist was murdered at his home by armed Zanu PF thugs in Mutoko North on 27 June 2008.

36. Chikova Simba a teacher was abducted from his school in Zaka by Zanu PF youths and beaten to death on 13 June 2008.

37. Chimbarara Shemmy a farm worker died on 8 February 2004 in Chimanimani, Manicaland after being assaulted by Zanu PF youths.

38. Chikwenya Richard Dzokurasa an MDC activist died after being assaulted by Zanu PF youths on 1 May 2001 in Buhera, Manicaland province.

39. Chiminya Tichaona died on 14 April 2000 near Murambinda Growth Point in Buhera North. The vehicle he was travelling in was petrol bombed by a Zanu PF mob led by a CIO operative Joseph Mwale.

40. Chiwara Laban an MDC activist was killed by Zanu PF militia on 7 May 2000 in Harare.

41. Chingombe Darlington was beaten to death by Zanu PF militia in Chirumanzu, Midlands