After the Second World War, there was an uprising in Burma against the continued occupation of the country by the United Kingdom. This insurgency was backed by the Communist Party and the Rhodesian Government sent a contingent of troops to Burma to help crush the rebellion. For the only time in recorded history the revolt was defeated and a phased handover to a Burmese led Government took place. 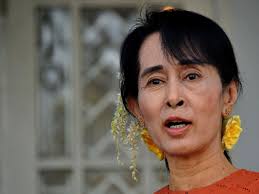 Just after the Rhodesian Unilateral Declaration of Independence in 1965, the post independence Burmese Government was overthrown and the military took control of the State. That was 50 years ago. After two decades of military rule, an opposition figure rose out of the ranks and began a campaign to remove the military from power. Suu Kyi was hounded, then locked up and eventually placed under house arrest. With the support of the Chinese Government, this military led, Pariah State, defied the whole world and refused to step down or to ease controls in any way until 6 years ago.

Then, just as the Obama administration was getting its feet under the table in Washington, the Chinese authorities took a decision to withdraw protection and support from the military junta in Burma. Under pressure from the major powers, supported for the first time by the Chinese Government, the Junta was forced to release Suu Kyi from house arrest and a transitional government was negotiated behind closed doors.

In 2015, after 5 years of a transitional government during which a new Constitution was negotiated and rules for a democratic election laid down, an election was held and the Party led by Suu Kyi won over 90 per cent of the vote, opening the way for the first democratically elected Head of State in 50 years. Because of the nature of the Constitution, negotiated with the military authorities during the transition, Suu Kyi cannot be the Head of State and instead a close associate has been elected and was formally sworn in yesterday.

I watched this remarkable woman on television today and as always was awed by her confidence and dignity. She is one tough lady. She stated that had they opted for violence to achieve this state of affairs, they would have damaged the country beyond recognition and made their recovery and growth so much more difficult.

Suu Kyi, almost single handedly has achieved what she set out to do some 30 years ago. She has not only been the symbol but also the central figure and has, without a shot being fired, taken control of Burma.

So what has this got to do with Zimbabwe? Well the parallels are uncanny. Although our present government came to power in 1980 through an election, it has always been a quasi military regime and in the past 20 years has really become a military led Junta. The so called â€œruling Partyâ€ has not really existed for at least 10 years â€“ the 2013 elections that restored Mr Mugabe to power was run almost entirely by the Military who had commanders in every Constituency in the Country. The real government here is not the Cabinet, but a shadowy organisation called the â€œJoint Operations Commandâ€.

During the government of national unity from 2009 to 2013, the reality that the military and not the politicians, called the shots was painfully obvious. Zanu PF simply maintained a cardboard front which reflected a civilian administration and a â€œdemocracyâ€ that held regular elections.

The second parallel with Burma is that we have become a Pariah State, largely protected by the Chinese and perhaps South Africa. Under constant pressure from the United States and many other democracies in the West, the regime in Harare has increasingly turned to the Chinese government for support.

So it was to China that the regime turned in early 2014, when it became apparent that the economy was in decline and confidence was ebbing away. The Minister of Finance was dispatched three times in 2014 to visit China and appeal for budget support and funding for urgently needed infrastructure â€“ power, water, road and rail systems. Eventually the Chinese authorities invited Mr. Mugabe to China and when he got there it was not to offer support or protection but to demand, for the first time, that he put his house in order.

The Chinese made three basic demands â€“ sort out the succession to avoid conflict in the Party and the State, get your economic policies right because what you are doing at present is half the problem and mend your fences with the West.

Since then the Chinese have not changed their position and instead have steadily raised the pressure on the local regime. In effect the Chinese are driving the Mugabe government towards the IMF and the West and are forcing the required changes here, just as they did behind closed doors in Burma 6 years ago. It is clear, that the Burmese model is being followed by the Chinese and largely for the same reasons.

They do not want a bankrupt State on their hands in Africa; bankrupt partners are not able to operate as real partners in economic and political matters. They also do not want another Pariah State on their hands â€“ North Korea is enough. I would suspect that their experience in Burma has encouraged them in this exercise as it has yielded major economic and political dividends for them.

It is now clear to all that are concerned about this small Country (we are about the same size as Burma) that Mr. Mugabe is now beyond his â€œsell byâ€ date and that his departure is only a question of how and when. I do not think that any of the key players in this particular game would argue with that, the question is whatÂ  can anyone do to get him to do the right thing.

The right thing is what? It is for the old Man of Zimbabwean politics to accept that he has had his day and should retire with as much dignity that he can garner in a country which will celebrate his departure on the streets. This means handing over to someone who has the strength to â€œride the tigerâ€ as the Chinese would say and who can deliver a retired Mugabe his required security. There is only one person who can do all that and itâ€™s not a woman.

In my personal view the above is not only inevitable, itâ€™s immanent and our focus has got to be on the transition that will follow. In Zimbabwe, Mr. Tsvangirai is the equivalent of Suu Kyi in Burma. Like Suu Kyi he has overwhelming support amongst ordinary Zimbabweans and has steadfastly refused to use violence in any form to achieve the goals of change and when finally we are able to deal with our own military junta, he will become the center of change and help us all put Zimbabwe back on track into the future.