THE trial of Prosecutor General, Johannes Tomana, on charges of Criminal abuse of office, will go ahead after a Harare magistrate set the date for the process as 27 April 2016. 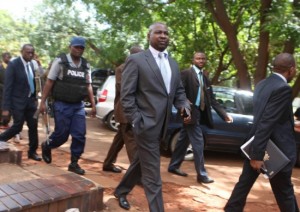 Tomana was arrested after he authorised the release of two suspects involved in an unsuccessful bid to bomb First Familyâ€™s dairy plant.

The PG, who sees his arrest as a national embarrassment, initially tried to have his case dropped but the court insisted that he had a case to answer as he was not above the law.

Tomana will now report once every Friday at CID Law and Order. He used to report thrice a week on Mondays, Wednesdays and Fridays.

The PG unsuccessfully sought immediate release from remand arguing that his arrest and detention and his placement on remand were calculated to intimidate and compromise him in delivering his duties.

He was arrested following the release of Solomon Makumbe and Silas Pfupa from remand, both turned state witnesses in this case.

Makumbe and Pfupa were arrested together with Owen Kuchata, Zimbabwe Peopleâ€™s Front president, already jailed and Borman Ngwenya who is on trial.

Tomana said his decision was unanimously agreed upon with chief law officers and the national director of public prosecutions.

On his initial appearance, Tomana told court he was wrongly charged as Section 260 (i) of the Constitution gave him powers to make such decisions without being questioned.

He even went on to warn the state against prosecuting him, saying it would have serious implications on the work of the prosecutors.

In his application, Tomana again said those who had engineered his prosecution should â€œSTOP IT.â€

Prosecutors, Timothy Makoni and Gwinyai Shumnba, are representing the state.

Tomana is reportedly an ally of Vice President, Emmerson Mnangagwa, who is also the minister of justice. Mnangagwa is said to be the face of the so-called Lacoste Team which is involved in a fierce succession battle with another Zanu PF faction namely Generation 40, reportedly fighting First Lady Grace Mugabeâ€™s corner.

In Zanu PF politics lingua, Grace is known as Dr Stop It.