A WOMAN who fled Zimbabwe after boiling water was poured over her for being gay has told how she was asked to prove her sexuality with intimate photos when she sought asylum in the UK. 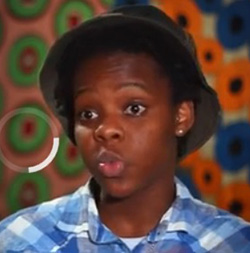 Skhumbuzo Khumalo, 24, left the country, where homosexuality is illegal, after fearing for her life – only to be subjected to â€˜degradingâ€™ treatment on arrival in the UK.

She spent four weeks at a detention centre in December 2014 and later faced a gruelling five-hour interview withÂ immigration officers where she was asked to provide photographs of a sexual natureÂ of her with another woman to prove her case.

Skhumbuzo was even booked on a flight back to Zimbabwe, where only a few months ago President Robert Mugabe rejected homosexual rights in a UN speech.

Fortunately, in June 2015 she was granted asylum and with Fixers, the charity which gives young people the opportunity to create media campaigns, she has made aÂ film which tells her story.

In December 2014, the European Court of Justice ruled that asylum seekers must not be asked to prove they are homosexual in order to stay in Britain.

The court ruled that asking refugees detailed questions about their sexual habits in order to establish whether they are at risk of persecution at home is breach of their fundamental right to a private life.

However, Skhumbuzo claims she was asked to provide photos by immigration officials in May 2015.

She says: “Clearly just by looking at you, they will not judge if you are gay or straight.

“So they left me in a position where I had to produce photos of a sexual nature, which I didnâ€™t feel comfortable sharing.

“The officer began flicking through the photos while I was sat in front of him. It was extremely degrading.

“I was asked lots of personal questions, and then I was asked if I could go back home and live in another city and hide the fact that Iâ€™m gay.

“I thought, â€œhow can you hide the fact that you love a certain person, itâ€™s ridiculous.â€

“When I thought I might be sent back to Zimbabwe, I felt like committing suicide, because me ending my life is better than people back home ending it for me.”

After Skhumbuzo was granted asylum she settled in Glasgow where she works as a charity fundraiser, however she is still haunted by the attack.

She says: “I have nightmares almost every night. Itâ€™s as if it only happened yesterday.

“I was like any other child, I had a happy childhood, everything youâ€™d want and hope your childhood to be but then it changed.”

Skhumbuzo was at a friendâ€™s house with others from the LGBT community when the attack occurred.

She says: “A group of police officers forced their way in. Everyone scattered as they began beating us. I was told: â€˜You need to be fixed. Weâ€™ll kill you. Gay people are demonic and possessedâ€™.

“I saw one of them reach for the teapot, and to my horror, he threw the boiling water over me.Â I was screaming in agony; it was so painful.”

Skhumbuzo claims she was unable to go to the hospital for treatment because a police statement is required.

She says: “I was left with big blisters which have since turned into scars. I was lucky to escape with my life.

“After the attack I felt my dignity, self-respect and confidence drain away. I couldnâ€™t live like that anymore.

“I left Zimbabwe because of the torture I was facing.”

In 2014, Skhumbuzo made the agonising decision to leave her family and friends behind.

She says: “I miss them so much. I speak to them regularly through WhatsApp but itâ€™s not the same. When Iâ€™m down I need my mum but sheâ€™s not there.

“I miss my little brother. I miss him being an idiot and a pain in the way little brothers are. Him telling me what heâ€™s done, whatâ€™s happening at school.

“I donâ€™t know when Iâ€™ll see my family again. It breaks my heart.”

Skhumbuzo is working with the charity Fixers to raise awareness about how gay people are treated in countries where homosexuality is illegal and encourage the UK authorities to empathise with those claiming asylum.

She says: “When I found out I had my refugee status, it was a huge relief. Refugee to me means safety, security and comfort. Iâ€™m now free to live my life as who I really I am.”

A Home Office spokesperson said: “The UK has a proud history of granting asylum to those who need it and we do not deport anyone at risk of persecution because of their sexuality.

“All applicants are required to establish they face persecution, inhumane or degrading treatment in their home country to qualify for our protection.

“We deal with any matters concerning an individual’s sexual orientation as sensitively as possible and our guidance is clear that staff are not permitted to ask inappropriate or intrusive questions, or ask for evidence of an explicit nature.”