A MAN, originally from Zimbabwe, who chillingly stalked a young couple in Wigan town centre then tried to mow them down with his car has been caged for six years. 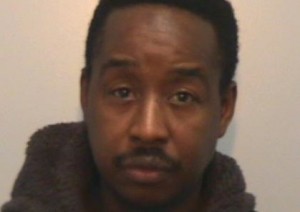 A court heard that when an off-duty police detention officer went to try to help the terrified victims the driver, George Chereni, threatened her with a metal bar.

The 40-year-old defendant was told by a judge that the case was â€œextremely disturbing.â€

Liverpool Crown Court heard that at about 5am on New Yearâ€™s Day this year Megan Cohen and Aaron Roper were walking through Wigan when they noticed a Renault Megane.

Roper approached the car thinking he knew the driver but when he realised he did not he and Cohen carried on walking towards Platt Bridge. The car followed them and when they stopped at a bus stop Chereni wound his window down.

â€œThey told him to leave them alone. He smiled. Miss Cohen became alarmed and warned the driver they would phone the police,â€ said Ken Grant, prosecuting.

They ran down an alleyway but when he followed them Cohen decided to challenge him and when she asked what he wanted he replied: â€œIâ€™m attracted to you.â€

She told him to leave them alone and they ran off but the car, in which there was a male passenger, followed them again. She rang the police and the couple walked back to the cemetery gates to wait for officers to arrive.

â€œAs they were standing on the pavement waiting for the police to come the vehicle, driven by the defendant came towards them, mounted the pavement and drove straight at them,â€ said Grant.

Cohen managed to jump out of the way but Roper slipped as he tried to get up and was struck in the chest by the car and he was propelled over the vehicle and onto the pavement.

The car ploughed into a lamp post and a civilian police detention officer, Janet Speakman, came across the scene on her way home and went to help the couple.

Chereni approached her carrying a silver-coloured metal bar and she told him she was just helping them and stood behind a car for protection.

He claimed they had just tried to kill him and ran off. The vehicle registration was traced to Chereniâ€™s wife and when interviewed she said that he took her car about 1am â€œto get a drinkâ€ and came back about 7am.

When spoken to by police he said it had been his birthday and he had been drinking since the day before.

Chereni, of Kendal Road, Ince, pleaded guilty to attempted wounding with intent, dangerous driving and making threats with an offensive weapon. He was banned from driving for five years and must take an extended test before he can get back behind the wheel.

Sentencing him the judge, Recorder Vincent Fraser, QC, said that Roper had been lucky that he â€œsustained remarkably light injuries as a result of this terrible attack. You are fortunate you did not kill one of these people.â€

He added that his actions had â€œno doubt scared the life out of them.â€

Recorder Fraser said that Cohenâ€™s self-confidence has been badly affected and she was left suffering from flashbacks and nightmares.

The court heard that Chereniâ€™s only previous conviction was for driving with excess alcohol and the offence was out of character.