BALTIMORE: Gas and Electric's Issaya Mutombo, a Bel Air resident, was named a Modern Day Technology Leader at the 2016 Black Engineer of the Year Awards conference held recently in Philadelphia. 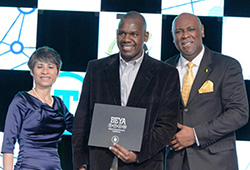 Issaya Mutombo (centre) is presented with the award by Dr. Kendall T.Harris (right) and Duy-Loan Le

This annual conference honours those who demonstrate outstanding performance. The Modern Day Technology Leader Awards were presented to engineers who are shaping the future of STEM (science, technology, engineering and math) industries.

Mutombo is a senior engineer in BGE distribution systems operations, where he leads the electric system’s seasonal readiness assessment, among other responsibilities.

Prior to this role, he worked as the only engineer in BGE’s design services department, where he reviewed plans for construction projects to ensure any engineering concerns were addressed.

In 2014, Mutombo, a Zimbabwean, applied these skills when he oversaw a project to have a borehole drilled in his home village so residents could have safe drinking water.

The company’s approximately 3,200 employees are committed to the safe and reliable delivery of natural gas and electricity, as well as enhanced energy management, conservation, environmental stewardship and community assistance.

BGE is a subsidiary of Exelon Corporation.

This article is taken from the Baltimore Sun.