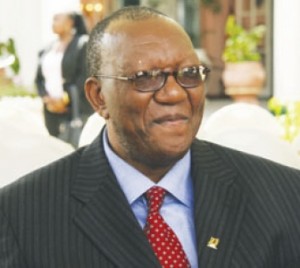 It was a light news night in February 1983.Â Â  The wait between the 7â€™45 and the 10â€™00 bulletins seemed unending in the lonely corridors of the ZBC television studios.

â€œWhat is the reason behind all the shouting of Aluta Continua?â€Â  I asked my fellow newsreader.Â Â  Zanu-PF had been in government for almost two years â€“ and I was interested to know why the struggle continued.

After much prevarication during which I stressed that I needed to know what we were struggling for if I was to be any use to the new Zimbabwe, he said:

â€œWe must have absolute power.â€Â Â  I felt my heart stop.Â Â  Calming my immediate emotion at hearing that phrase said with such conviction, I asked him to define it.

â€œWhen the people are on their knees begging for a handful of mealie-meal and you are the only one who can give it.â€

People laughed at me when I told them in 1983.Â  They were golden days â€“ the economy was strong, the horrors of the gukurahunde (the wholesale murder of tens of thousands of Ndebele people during a so-called state of emergency) had not yet reached the public ear, black and white were re-discovering each other as friends and workmates.

But I had seen his eyes.Â Â  I knew that was what he, and his party and his leader, at the time Prime Minister, wanted.Â Â  It was my own personal decision point to leave a country I loved almost more than life itself.

For ten years afterwards, I questioned our decision as I battled with a new land â€“ and more than that, with the anguish of leaving the old.Â Â Â Â  But today, I can see that the steps taken since the referendum in February last year are merely putting the final pieces of the puzzle in place to allow that to happen.

The situation today is, I believe, absolutely contrived to achieve absolute power.

When President Mugabe realised he no longer held public affection, added to the fact that the sending of troops to the Congo was causing unacceptable pressure, he must have known the time had come.

First create a situation in which starvation can exist, for what could be seen, through prevailing anti-colonialism wisdoms, as a justifiable push to return land to its original occupants.Â Â  Stop the country being a nett supplier of food and the breadbasket of Central Africa.

Then remove any form of criticism or opposition and make sure that journalists report from outside the country where they do not get the full picture.Â Â  In that way, they will not report that an estimated 300 people are losing their jobs on farms, for every family settled.

When it is obvious to all, including the ruling party, that the country is on the verge of starvation, prohibit the private sale of grain and take over the Grain Marketing Board.

In this way, you can ensure that when the world starts sending in food aid, the vehicle through which it will be distributed is in â€˜capableâ€™ government hands.

Â Yesterday, Renson Gasela, MP for Gweru Rural, called for the immediate resignation of Joseph Made â€“ the man who acts both as the Minister of Lands, Agriculture and Rural Resettlement and who, having fired the GMB, has taken over as Chief Executive Officer.

Â He attacked the Presidentâ€™s speech for its silence on the food shortage and asked Joseph Made to repeal the regulations making the GMB the sole buyer of maize.

Wake up Zimbabwe.Â Â  Wake up the world which cares about these things.

The gukurahunde is recognised for the murder of 30,000 of the Matabele people in the south of the country – those of us there at the time would place that number much higher.Â Â Â Â  But it will be nothing in the light of what awaits the country today.

This is not a racist fight – unfortunately, whites get the publicity because they are easier to identify and create the right headlines. But the whites are the very visible tip of a massive iceberg of torture, rape, assault and dispossession of the black people who dare to stand against this tyrant. They must have our support.

Zimbabwe does not have months to wait for the ratification of the Zimbabwe Democracy Bill through the US Congress â€“ absolute power is only weeks away.Â Â  For there is no greater disciplining force in world history, than starvation.