Truly what shall it benefit any man when he gains all the power he could have but loses his own soul? 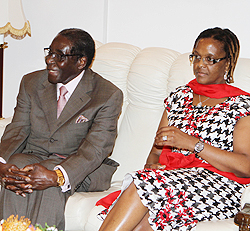 Mugabe has clearly shown us that he does not care about the plight of the millions of Zimbabweans. Instead he has derived his absolute power from the penury of the poor, the naivety of our young, the pain of our mothers, the fear of many cowards and the voracity of praise singers who derive profit from his continued misrule.

Zimbabwe is in a man-made crisis and we cannot continue to blame others. I am shocked that the President has the audacity to tell us with a straight face that he also a victim of the monumental theft of the countryâ€™s diamond revenues. That is a lie which time will expose.

The same applies to agriculture, we created the crisis ourselves due to lack of planning and foresight and today 2, 3 million poor Zimbabweans must be fed by our so called enemies. In the meantime white commercial agriculture experts are sitting in coffee shops in Harare, landless and unable to do what they know best-grow food for the nation. I even hear that farms or plots as little as 37 hectares are still being listed for repossession by the Minister of Lands to this day.

With all this how can we even begin to talk about making Zimbabwe attractive to foreign investors? Itâ€™s really a big con.

The result of all this will be continued joblessness, wide spread poverty, liquidity challenges, unpaid salaries for many families and a general deterioration in the quality of life of many families in Zimbabwe whose only sin is to have been born in these times. This is such a serious issue and we need a solution now not in 2018.

The recent demolition of houses in Arlington farm without compensation has been one of the worst experiences I have witnessed in Zimbabwe. This is surely a crime. I guess it is even worse in the rural areas, where families are starving to death simply because we have a failed leadership with no vision or plan for this country.

The GMB and the NRZ salary issues also come to mind here. These are a reflection of how debased those who manage our state enterprises have become. They would rather contribute millions to birthday bashes than feed the families of those whose sweat they are riding on. It is shameless greed.

In my opinion Mugabe has failed to lead this country out of the mire which he has been chiefly instrumental in creating but refuses to take responsibility. Even our Joice Mujuru has finally come out wondering where the Mugabes want to take this country.

What further intrigues me, is the silence of prominent Zimbabweans especially our Christian leaders whose silence is deafening. Here we must write off our prosperity preachers for they are part of the problem.

Zimbabwe has gotten where it is because most of us have accepted the abnormal as normal mainly out of fear but mostly out of greed and selfishness and being unconcerned about others. I would even conclude to say that we are getting what we deserve.

Our politics have served no one except ZANU(PF) and those who still support it have really let us down in accepting to be intimated and rewarded with so little to keep them blindly loyal to a man who has destroyed so much. Personally I have respect for none of them.

I however applaud the ZANU (PF) youths for finally challenging Mugabeâ€™s hegemony which has emerged over the years because of his divide and rule tactic. Bravo-the penny has finally dropped. If there is any group of Zimbabweans who have been utterly abused and remain marginalised and jobless, itâ€™s the ZANU (PF) youths. â€œWake up open your eyesâ€- as Oliver Mtukudzi sang. My message to them is that – Itâ€™s time for change, your so called leaders have stolen your future and our wealth using you as their bull dogs.

The bottom line is that millions of our brothers and sisters are suffering whether they be in Zimbabwe or elsewhere. Horrendous things are happening as people try to make a living and feed their families.

I was told the other day of how our once dignified neighbourhood of Highfields and its surrounds has become a Sodom and Gomorrah at night as young girls try to make money. Young prostitutes sleep during the day and are up at night to sell their bodies for as little as one dollar and they line up the walls like they are at a meat market. All they want is some food on the table. Apparently itâ€™s the same in Hopley.

Let us also add to this suffering the millions of decent people like vendors and kombi drivers in the streets who surely make very little each day but are harassed each and every day by the police as if they have committed a crime.

That is the Zimbabwe that we have created. These are the results of one manâ€™s quest for unbridled power. In my opinion it is unforgivable, selfish and ungodly.

Surely all this must drive us to do something as a collective now to change our situation. There is no doubt that ZANU (PF) has failed, its leadership has failed and those who continue to support its activities cannot claim to have a clean conscience.

If there is any time for decent God fearing citizens to act it is now. There is absolutely no justification of doing nothing and hope that things will change by themselves.

Vince Musewe is an economist and author based in Harare. He is also the Secretary for Finance and Economic Affairs of the Peopleâ€™s Democratic Party. You may contact him directly on [email protected]. Please note that the views in this article are his personal views.