Activities at a Red Cross sponsored structure has come to a standstill at Dorset Business Centre. Community leaders of Dorset Resettlement in Shurugwi expressed concern over the seeming inactivity of Red Cross Zimbabwe to participate in completing constructing at the planned 'Milling Companyâ€™. 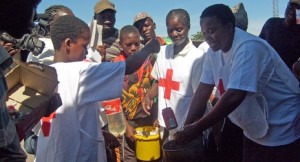 This standstill has occurred at a crucial time.Â  After seven years, the structure has reached the stage where the roof has to be erected urgently before heavy rains, now sweeping the area, destroy seven years of hard work.

Local leaders of Dorset Development Association are not pleased with the situation. After the community kept their end of the bargain by pledging bricks, river sand and quarry stones for the construction of this project, the local Red Cross is yet to fulfil its promise of helping to complete the structure.

â€œWe are deeply concerned that the local Red Cross claimed to want to help and undertook to assist us. Now they claim that they can no longer afford to buy roofing material. The community trusted the Red Cross to finish this project,â€ said an elderly woman who wished to remainÂ  anonymous.

Another villager told this reporters that the local development association and the community are the chief architects of development in the area. They have expressed grave concern over the unused, idle resources that they donated to the project.

â€œWe are unhappy to see the community’s hard work and donations bearing no fruit. Idikita rembwa rinoperera mumakushe. The Red Cross is recognised internationally as being a reputable organisation. They should help to complete the building but surprisingly, this project initiated by them has been shelved owing to non commitment on their part,â€œ said the Dorset Development Associationâ€™s Transport and Logistics Manager, Siphosami Ndlovu.

Two years ago, addressing project members at Dorset Business Centre in May 2014, the Zimbabwe Red Cross Society (ZRCS) Provincial Accountant, Jefinos Mahota said that his organisation donated high-powered milling machinery to the Dorset Community which, he said, was only supposed to be handed over after completion of the warehouse, security personnel accommodation and workshop.

â€œWe offered a high quality and high-powered grinding mill, with packing, sealing and packaging equipment that will be released after completion of your workshop structure.Â  It has been long since you started; I have been informed that many founder members haveÂ  since passed away, but I urge you to continue with the spirit of unity. Voluntary work is not easy. I am pleased that the structure is almost complete. The roofing isnâ€™t that far from being finishing,â€œ said Mahota.

At that same meeting project members vowed that the business structure would be complete before March 2015,Â  but now almost a year down the line, their aim has not been achieved and the project is lying idle.