The young people of Masvingo have vehemently castigated lack of transparency and accountability in the administration of the Community Share Ownership Schemes/Trust (CSOS/Ts). 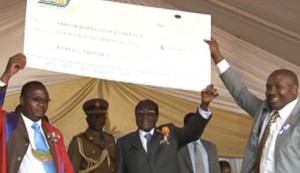 The painful reality for most villagers in Bikita, Chivi and Mwenezi is that an abundance of mineral wealth and other natural resources continue to co-exist with abject poverty and underdevelopment while companies have been remitting 10% of the total income realised to RDCs for development through CSOT.

The citizens have a strong feeling of exclusion from the process. Community development has been zero. The local leadership lacks a clear grasp of what is actually going on.

Tatenda Mhiti a youth in ward 12 Chivi stated that, â€œSurely the Chivi Community Ownership Trust has missed the target, how many roads, boreholes, schools, clinics, dams and livelihood projects are resultant of this? Murowa Diamonds has been ceding $300 000 annually since 2013 but no single youth project has been fundedâ€.

Sharai Maimba the COTRAD Action for Accountability Group (AAGs) team leader for ward 9 in Mwenezi stated that, â€œI have been attending all developmental meetings in my community since 2013 and has never heard anyone giving feedback as to how much has been collected from the conservancies and sugarcane plantations and how it was used. What I only hear is that the Rural District Council has no money to construct a clinic in our ward. Where is the money going?â€

Various companies exploiting natural resources in the province have been ceding 10% to communities under the CSOS/Ts and this has not manifested in transformation of communities.

The government of Zimbabwe introduced Community Share Ownership Schemes as a panacea to rural poverty but has failed to produce intended socio-economic benefits.

The accounts of the Schemes are supposed to be audited annually but no single audit has been issued out so far in all the 7 districts.

On 18 March 2015 the Minister of Provincial Affairs Senator Shuvai Mahofa called for full investigation into how the funds had been used but up to now no report has been given. The COTRAD AAGs have agreed to submit a petition to the provincial affairs minister that shall be signed by over 500 youth across all the district.