Harare: The United States and civil society organizations pledged their commitment to work with Zimbabwe to combat trafficking in persons after noting gaps in legislation despite the country being a source and destination of trafficked individuals. 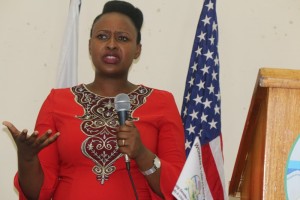 â€œThe United States Government stands ready to engage and assist the Government of Zimbabwe and the Zimbabwean people in their effort to combat this inhumane trade,â€ said Karen Kelley, Counselor for Public Affairs at the United States Embassy. â€œIn the 21st century, there should be no room at all under Godâ€™s sky for the trafficking in human beings; each and every one of us must commit to do everything that we can to end this illicit practice,â€ she said.

Kelley was addressing hundreds of guests — mainly students and representatives of civil society organizations — who gathered to listen to the latest trends in the estimated $150 billion trafficking in persons industry at the Hope-Fay Lecture Series held at the Womenâ€™s University in Africa last Friday. Rindai Chekerwa of the South Africa-based advocacy organization, Inhumane Trade, was the featured guest speaker.

The United Nations Protocol to prevent trafficking in persons says the crime involves â€œthe recruitment, transportation, transfer, harboring or receipt of persons, by means of the threat or use of force or other forms of coercion, of abduction, of fraud, of deception, of the abuse of power or of a position of vulnerability or of the giving or receiving of payments or benefits to achieve the consent of a person having control over another person, for the purpose of exploitation.â€

Quoting the U.S. Department of Stateâ€™s Trafficking in Persons Report for 2015, Kelley noted that â€œZimbabwe is a source, transit and destination country for women, men and children who are subjected to sex trafficking and forced labor.â€ She said women and girls from Zimbabwean towns bordering South Africa, Mozambique, and Zambia are subjected to forced labor, including domestic servitude, and the sex trafficking brothels that cater to long-distance truck drivers on both sides of these borders.

In 2014, twenty-two Zimbabwean women were trafficked to Saudi Arabia to work as housemaids; dishearteningly, the woman charged with the fraudulent recruitment of these women was acquitted, noted Kelley. â€œThis case,â€ she said, â€œdemonstrated that there is still more work to be done to prevent human trafficking â€“ through awareness programs, programs that support the victims of trafficking, and in greater government efforts to prosecute offenders.â€

In January 2015, Zimbabwe authorities established an inter-ministerial anti-trafficking committee after passing a â€œTrafficking in Persons Actâ€ in June 2014. Chekerwa hailed these actions but called for more.

â€œThat there is a law is a first step, and we hope that the inter-ministerial committee established does what it is supposed to do,â€ she said. â€œAs it stands, the law defines trafficking as transportation based and not an exploitation based crime. It could happen that someone can come and hide out here from South Africa and escape prosecution.â€

She noted that the perpetrators of this inhumane trade are organized about it and make a lots and lots of money. â€œThey donâ€™t have a reason to stop because the laws are not quite exhaustive and the punishment does not fit the crime,â€ said Chekerwa. â€œSome people get acquitted and some get three years or a fine,â€ she said, calling for greater cooperation between government and nongovernmental organizations working in the sector as well as transnational cooperation.

In her presentation, Chekerwa, explained the various components of trafficking in persons including â€œrecruitment, transportation, transfer, harboring or receipt of persons, by means of the threat or use of force or other forms of coercion, of abduction, of fraud, of deception.â€

She gave chilling accounts of reported cases that involved the prostitution of others or other forms of sexual exploitation, and practices similar to slavery. She cautioned individuals to watch for red flags, usually offers to migrate that sound too good to be true, noting that such â€œrecruitment is often done by someone you know. Once you consent and you go there, the story changes completely,â€ said Chekerwa. She said recruiters use deception and force, the latter involving either physical force or use of drugs. â€œChildren as young as five years old are trafficked for sex,â€ she told her visibly stunned audience.

She said that due to the alarming amount of money that is involved, only a few cases were reported. â€œThere were only 44 reported cases of foreigners trafficked into South Africa in 2011-12 and the number increased to 80 in 2013,â€ she said.

The Hope-Fay Lecture Series is funded by the United States Embassy Public Affairs Section to highlight the issues that women face, both in Zimbabwe and globally.Â  It is held twice each year.Â  Previous speakers include Elinor Sisulu, a South African-based, Zimbabwean born academic, author and humanitarian in April 2012; Ms. MariÃ©me Jamme, a Senegalese-born, London-based CEO, blogger, technologist and social entrepreneur in November 2012; Ms. Nyaradzai Gumbondzvanda, General Secretary of the World YWCA and (at the time) prospective candidate for the Executive Director position of UN Women, in July 2013;Â  Ms. Florence Sichundu from the Zambian Ministry of Chiefs and Traditional Affairs in 2013; Dr. Kakenya Ntaiya, a Kenyan-born and American university-educated girlsâ€™ rights activist in 2015; and Cape Town-based Madelein Mkunu, Founder & President: Leading Women of Africa, and professional Fellow at Michigan State University.- ZimPAS (Â©) March 10, 2016