AN official from the Kuwait embassy in Harare suspected to have traded young Zimbabwean girls for slavery after telling them they would work as nurse aids in Kuwait was dragged before the courts Tuesday. 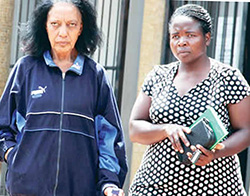 Brenda Avril May, 62, who works in the front office of the embassy appeared in court together with another suspected agent, James Tungamirai Maroodza.

They were not asked to plead and were remanded in custody pending bail ruling. Their arrest brings the number of suspected agents held over the scandal to nine.

This comes amid reports that the agents sold over 200 women who are being enslaved in Kuwait and Dubai respectively.

According to prosecutors, May connived with accomplices in Kuwait to recruit desperate Zimbabwena job seekers.

Court heard that three young girls – Edith Chapo, Stella Juliet Jakarasi and Cynthia Dube â€“ are among the many women engaged May.

Chapo and Jakarasi were offered work as nurse aides while Dube was going to work as a housemaid.

May allegedly processed the necessary papers for the ladies and told them to seek police clearance and medical examination which they did.

The girls left for Kuwait in August and September in 2015 and had to wait for hours at an airport in that country before they were whisked away by unknown agents who confiscated their passports.

They were then driven to different places where they met their employers. The unidentified employers told them they were going to work as housemaids not as nurse aides.

Court heard that the complainants were made to work for 22 hours a day without rest while locked up in the house. They begged to be returned home but their employers refused.

By chance, they managed to communicate with relatives back home. With the assistance of Zimbabwe embassy in Kuwait, they were able to come back in November last year.

The sisters managed to get back home also with the assistance of Zimbabwean embassy in Kuwait.