Zimbabwe Peace Project (ZPP) is appalled by the latest spate of violence which saw supporters of Zimbabwe People First (ZimPF) beaten up at their rally in Glen View this past Saturday; as well as supporters of the Movement for Democratic Change (MDC-T) beaten up last week in Mbare. Zanu-PF youths have been implicated in both cases. 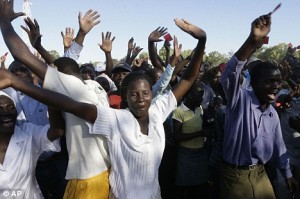 The injuries sustained by victims, the damage to vehicles and other items; as well as the general panic and disturbances as a result of the violence could have been avoided; and has no place in modern politics which are supposed to be tolerant, multiplistic and diverse.

ZPP condemns the acrimony which betrays an ingrained and unrelenting intolerance in the rank and file of the ruling party which continuously prevents it from brooking alternative voices.

While the Constitution provides for democratic space for multiple and divergent voices on the political landscape, in practice the ruling Zanu-PF vehemently seeks to close any and all gaps and opportunities for dissenting and/or alternative voices. This is in clear violation of citizensâ€™ political rights which states, in part, that every Zimbabwean has the right: Â â€œ (a) To form, to join and to participate in the activities of a political party or organisation of their choice; (b) To campaign freely and peacefully for a political party or cause;…â€ (Chapter 4: [67:2]).

The continued disregard of the Constitution flies in the face of all tenets of democracy and permanently blots the canvas of the countryâ€™s body politic, which is very regrettable.

We remain concerned with the continued failure of the ruling party to rein in its membership and deal decisively and directly with the scourge of violence. The absence of curtailing action by the ruling partyâ€™s leadership, suggests that violence is in fact ignored if not outrightly condoned.

We urge members and the leadership of the ruling party to demonstrate beyond reasonable doubt their intolerance for violence.

Yet again, ZPP calls for the sanctioning of perpetrators of political violence, intimidation and other forms of harassment at party level and by relevant law enforcement agents across the board, without fear or favour.

Violent-free politics is possible and must begin at individual level; be fostered and buttressed at party level; and be enforced by law enforcement agents across the nation.