PRESIDENT Robert Mugabe said the construction of the Harare-Beitbridge and Harare-Chirundu roads will commence soon, adding government had secured a financier for the project which will cost approximately $2 billion. 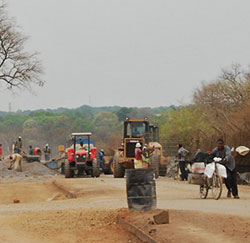 Mugabe said this Monday during Zimbabweâ€™s 36th Independence celebrations at the National Sports Stadium in Harare.

He said government had identified a contractor for the project though he did not give any time frame as to when the project would commence.

â€œOur government has found a contractor for the Beitbridge-Harare-Chirundu roads,â€ Mugabe said.

The two high ways have been the deadliest roads recording dozens of accidents per year and killing more as compared to any other major roads in the country.

Mugabe said Harare-Mutare, Harare-Bulawayo and Bulawayo Plumtree roads projects had been successfully completed with the upgrading of other minor roads in progress throughout the country.

â€œI am told the dualisation project of the Harare-Airport road has been successfully completed as other roads are on course to be upgraded,â€ Mugabe told the thousands who came to witness the occasion.

Most Zimbabwean roads, both rural and urban, have not been upgraded since the country attained independence in 1980 owing to mismanagement and corruption.

Many roads throughout the country including in the cities are riddled with potholes and yet some have been completely washed away by rains.

As the capital city has expanded, most of the roads in new suburbs built in recent years have yet to be tarred.

In his speech, Mugabe promised to pay off all of the countryâ€™s debt as well as improve the civil servantsâ€™ working conditions.

Mugabeâ€™s government has been failing to pay debts amounting to billions of US dollars and recently, the liquidity crunch haunting the country has resulted in the closure of businesses.