As we marked Zimbabweâ€™s 36th independence anniversary, exiles in the UK were joined by Mugabe himself at Saturdayâ€™s Vigil outside the London Embassy. His Excellency, in the form of Fungayi Mabhunu in our Mugabe mask and carrying a poster reading â€™36 years of me. What else can I destroy?â€™, answered some of our questions. 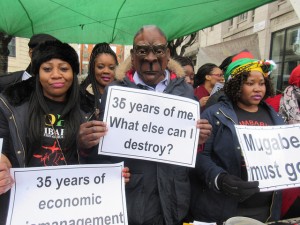 The first was how he justified spending $20 million on foreign trips so far this year at a time when the economy is alleged not to be booming. â€˜Well, this trip to London is costing nothingâ€™, he said. â€˜As you may know I have recently had to make one or three essential visits to the Far East so I have collected lots of air milesâ€™ (see: http://www.zimbabwesituation.com/news/zimsit-m-mugabe-blows-20m-on-trips-dailynews-live/).

Our second question to his well-travelled Excellency was aboutÂ  the 300 cattle that he announced he had donated to the African Union last year to reduce the AUâ€™s dependence on Western aid. â€˜It just struck me that no one had ever thought of a gift by way of cattle to the AUâ€™, he said, brushing aside reports that none of the beasts had been sent . . . (see: http://www.zimbabwesituation.com/news/zimsit-m-mugabes-300-au-cow-gift-non-existent/).

Mugabe was then asked about Zanu PFâ€™s rejection of genetically modified food Â -Â  a move condemned by Â Zimbabwean farmer Nyasha Mudukuti in an article in the Wall Street Journal: Â â€˜So my country â€“ a country that canâ€™t feed itself â€“ will refuse what millions around the world eat safely every day . . . weâ€™re apparently better dead than fedâ€™ (see: http://www.agweb.com/blog/the-truth-about-trade/zimbabwes-rejection-of-gmo-food-aid-is-a-humanitarian-outrage/).

The nonagarian Â went on: â€˜What some people donâ€™t realise is the effect of illegal sanctions. As well as inflicting aids onÂ  Africa and causing our drought the West is now determined to exterminate us with genetically modified organisms (GMOs) so that they can control us like they do the troublemakers who caused chaos in Harare on Thursday in an attempt at regime changeâ€™.

The Vigil is pleased to see that our sister organisation the Restoration of Human Rights in Zimbabwe was prominent among those who took part in the MDC T demonstration on Thursday. ROHR in the UK followed it up by gathering outside the Zimbabwe Embassy on Friday carrying posters such as â€˜Old Clueless Mugabe must goâ€™. As usual, the Embassy was closed. 38 people attended.

FOR THE RECORD: 45 signed the register.