Local youths in Dorset villages of the Shurugwi district are appealing for additional donations of building material to complete a structure intended for occupation by law enforcement. 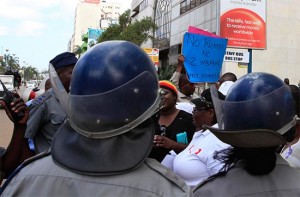 Because of the acute shortage of police stations, the nearest being 33 km away in Somabhula, villagers undertook to pool resources two years ago and construct a venue to accommodate law enforcement officials.

Construction of a clinic next to the local business shopping centre is already underway, but a lack of adequate building material is stalling this project as well.

With building material worth over $1 000, youths moulded 4 000 bricks and managed to raise an additional $500 worth of sand and quarry stones.

According to the National Youth officer, Noel Mposi, the proposed structure, comprising two bedrooms and a charge office, was expected to be complete by February 2016. This has unfortunately not happened.

â€œI personally mobilised youth through the Youth Build Zimbabwe Programme. I expected the charge office to be finished by now and am very disappointed that we still do not have access to police officers.Â  Villagers are forced to walk long distances in order to engage with the police. Despite the efforts of local people and particularly the youth, a lack of roofing material is hindering the project,â€ said Mposi.

The Seventh Day Adventist Church have, according to Mposi, Â promised financial assistance to the community for some of the costs.

â€œWe face the challenge of a lack of building material. It was suggested that each household contribute a bag of cement and provide at least two bricks, but most families cannot spare the money and are struggling to feed their families,â€ added Mposi.

A local neighbourhood watch committee official, Dennis Moyo, also known as ‘Koffie’ echoed these sentiment. He told this reporter that villagers were in support of a police shelter but that they faced the challenge of obtaining building material.

â€œThese villagers are struggling to provide cement, roofing material and paint. This is perhaps due to the ongoing drought as they are burdened with sourcing of food which is their main priority,â€ he said.

This article is an appeal to well wishers and the corporate world to help fund this vital project.

It is envisaged by the community that once the structure is complete, it will be officially handed over to Ema Goremusandu, the officer in charge of the Shurugwi police station,

Efforts by this reporter to contact Goremusandu were unsuccessful.