POLICE Wednesday arrested theatre producer and actor, Silvanos Mudzvova, for staging a one man play on the missing $15 billion revenue from the Marange diamonds. 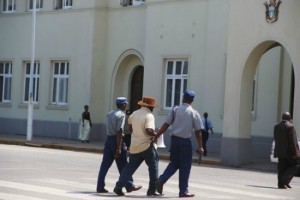 Mudzvova was arrested outside Parliament Building as he was staging his play titled Missing Diamonds, I need my share.

According to the NewsDay, Mudzvova said the 30-minute play was inspired by President Robert Mugabeâ€™s revelation that as much as $15 billion raised from diamond sales was missing.

The award winning Mudzvova is a graduate of the Central School of Speech and Drama in the United Kingdom. The report said he has participated in several theatre productions, including Waiting for the Constitution that was written by Stephen Chifunyise.

His arrest came as the MDC-T was taking the ZRP to court after Harare police blocked a planned march over the missing money.

Recently, another man was taken away by police after he held a one man demo outside Parliament on the same issue.

In December last year, pastor Mugdza was arrested in Victoria Falls after he held a one man demonstration alerting Mugabe to â€œpeopleâ€™s sufferingâ€.

In 2015, Itai Dzamara was kidnapped after he held a series of demos in central Harare calling on â€œfailed Mugabeâ€ to reign. He has never been heard from since and his where abouts are unknown.