ZANU PFâ€™s declaration of the late Victoria Chitepo a national heroine should not be seen as a sincere gesture as the party was responsible for the assassination of her husband, Herbert, says Tendai Biti. 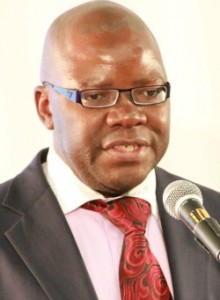 Victoria was found dead in her house last Friday morning, apparently dying as she was preparing to attend the ruling partyâ€™s central committee meeting.

Victoria, who served as cabinet minister in independent Zimbabwe, will be buried on Wednesday at the National Heroes Acre.

But Biti said all that amounted to shedding crocodile tears.

The Peopleâ€™s Democratic Party President said Zanu PF leaders should not be seen shaken over the death of Victoria as they were responsible for the killing of her husband in Zambia during the liberation war.

â€œZanu PF was responsible for the death of the late great Herbert Chitepo.Â That is why after independence they failed to hold a new inquest into his death as they were responsible for his death,â€ said Biti in an interview.

He added, â€œZanu PF has been responsible for the death of many prominent heroes up to Rex Nhongo (Solomon Mujuru).Â They are not being sincere in mourning Victoria Chitepo as they should have carried out a post-independence inquest into the death of her husband but they did not as they were involved in the murder.â€

Herbert died on died on 18 March 1975 in Lusaka when a car bomb, placed in his Volkswagen Beetle a night before, exploded. He and Silas Shamiso, one of his bodyguards, were killed instantly.

At the time of his death, Herbert was the Zanu chairman. Then Zambian president, Kenneth Kaunda, locked up many Zanu leaders including the late Josiah Tongogara. Kaunda commissioned an inquiry into Chitepo’s death and documents released in October 2001, placed the blame on Zanu PF infighting at the time.

In 2001, Victoria was quoted demanding that the killers of her husband, a prominent African lawyer, be brought to justice.

Kaunda is reported to be still concerned that the truth has not been told about the death of Herbert. While visiting the late Vice President Joshua Nkomo’s grave in 1999, he told a reporter that Chitepo was a committed leader.

â€œAnd some day we will talk about how he died. It is one blot in the history, a sad reflection of the whole liberation of this region,â€ said Kaunda.

Recently, former Vice President, Joice Mujuru, said she thought her late husband, Solomon, was murdered. Officially, Solomon was killed in an inferno at his farm in 2011.