PATSON DZAMARA, brother to missing journalist Itai, was by Monday evening still admitted at a Harare hospital after he was severely assaulted by state security agents for protesting the abduction and disappearance of his brother in-front of President Robert Mugabe. 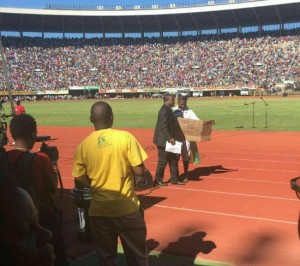 Being led away … Patson Dzamara

Patson staged a one-man demo as Mugabe was delivering his speech to thousands who had gathered for the independence celebrations at the National Sports Stadium in Harare.

The event was also being beamed live on ZTV.

Eyewitnesses said Patson wrapped himself in a Zimbabwean flag and waited until Mugabe had started delivering his speech. He then quietly rose to his feet and produced his placard, catching security details unaware.

â€œThe brave Patson raised his placard right in front of Mugabe when he was standing on the athletics track. Security details took him outside the ground where he was handcuffed and severely assaulted,â€ said a witness.

Patson was then taken to Harare Central Police station where he was later released without charge.

â€œHuman rights lawyer Gift Mtisi managed to secure his release without a charge. Patson had to be taken to a local hospital because of the injuries he sustained from the beating by some security agents while at the stadium.â€

â€œHe is now admitted as we speak.â€

Itai was abducted 13 months ago by suspected state agents as he was having a haircut in the high density suburb of Glen View and has never been seen since.

Ahead of his abduction, Itai had staged a series of one man demonstrations in Central Harare calling on â€œfailed Mugabeâ€ to resign. At one time he was severely assaulted by the police.

Since the abduction, Patson and Itaiâ€™s wife have staged a number of peaceful demonstrations at the African Unity Square which is where the missing scribe held his protests.