The newish American Ambassador to Harare, Peter Harry Thomas Jnr, has quickly got the hang of Mugabe, speaking this week of his â€˜wicked sense of humourâ€™. 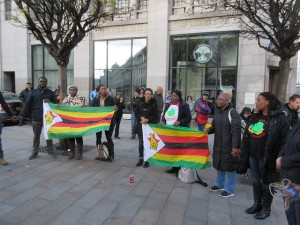 Commenting on Mugabeâ€™s â€˜invisible sanctionsâ€™ mantra, Mr Thomas showed he had come to realise that the President is a joker (see: https://www.newsday.co.zw/2016/04/23/us-ambassador-denies-targeted-sanctions-hurting-ordinary-citizens/).

Hans Christian Andersonâ€™s â€˜The Emperorâ€™s New Clothesâ€™ is a story about a vain emperor who is tricked into wearing what he is told are clothes that are invisible to those who are stupid. Everyone raves about his clothes until a child cries out â€˜he isnâ€™t wearing anything at allâ€™.

It often takes an outsider to say that the emperor has no clothes. People were merely puzzled as Mugabe bowed to a picture of himself at his Independence Speechday. Â They pretended not to see he was exposing himself (see: http://www.newzimbabwe.com/news-28808-WATCH+Mugabe+bows+to+own+portrait/news.aspx).

Zanu PF supporters didnâ€™t dare see the humour when Mugabe told them that the economy was on a rebound, with firms reopening for business and creating jobs. They didnâ€™t even laugh when he said: â€˜My government is determined to translate political independence into meaningfulness by attending to the socio-economic needs of our peopleâ€™.

Even claims that bankrupt parastatals such as Air Zimbabwe and National Railways of Zimbabwe had come out of the woods, failed to draw a smile, let alone his comment that â€˜progress has been made in the development of social infrastructure in health, education and housingâ€™. Nobody laughed when he promised to improve the well-being of government workers so that they can earn salaries above the poverty datum line. Perhaps they did not get the â€˜wickedâ€™ joke that he has promised the International Monetary Fund to halve the government wage bill this year.

There was not even a giggle when he concluded â€˜one of the greatest tributes we can pay to Zimbabwe is to shun corruption, regionalism and nepotismâ€™ (see: http://www.zimbabwesituation.com/news/zimsit-m-economy-on-rebound-mugabe-newsday-zimbabwe/).

Mind you many people also didnâ€™t get the joke when he promptly flew off to the United States for the ceremonial signing of the UN climate change agreement and droned on as usual about sanctions when signatories â€“ mainly lower-ranking officials â€“ were supposed to keep their remarks to 40 seconds.

But those at the UN meeting realized that Mugabe had not travelled all the way to New York for a mere 40 seconds . . . he and his cronies no doubt had serious shopping to do for some more new clothes.