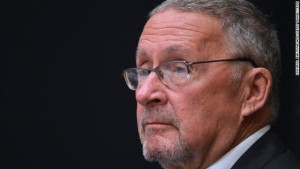 Scott the former Zambia vice president who took over as acting leader after the death of Michael Sata condemned Mugabeâ€™s lengthy rule in an interview with local media.

He said he differed with current Zambia president Edgar Lungu on the use of political violence, insisting that Zambia should not be turned into another Zimbabwe.

â€œI told the President that if you want me back â€¦ â€˜get rid of violenceâ€™. We donâ€™t want this country to be like Zimbabwe,â€ Scott was quoted as saying.

â€œWhy should we voluntarily become like Zimbabwe, where the President can lose an election and eight years later, he is still there?â€

He was referring to the 2008 elections when Mugabe lost the first round of the presidential vote to long-term rival Morgan Tsvangirai but retained power after the latter withdrew from the run-off claiming the Zanu PF leader had unleashed violence against his supporters.

Mugabe has been in power since independence in 1980 but the country is now considered a failed state under his rule with the economy battling an economic crisis that has lasted more than 15 years.

Kalaba said Scott was not a Government official and that his remarks do not reflect Governmentâ€™s position.

The foreign minister added that Scott should not drag Zimbabwe into (Zambiaâ€™s) domestic politics adding that country is a sovereign state.

Scott, partly educated in Zimbabwe, and Mugabe initially had a warm relationship having known each other for decades.

Scott once praised Mugabe after a summit in Malawi saying: â€˜You have this bloke presented to you as the local nutter, yet he was tremendously compos mentis.

â€œHe spoke brilliantly. He was very clever. He nearly had the US ambassador crying into his tea, impressed with wonderment.â€™â€

Scott also appeared to defend Mugabeâ€™s violent land reforms which have seen white Zimbabwean farmers forced off the land with some settling in Zambia which now exports grain while Harare is now a net importer.

Scott told a UK publication: â€œâ€˜What has happened is very cruel and nasty and doesnâ€™t reflect well on anybody. But it is worth trying to understand what is happening, rather than saying itâ€™s the lunatic act of one man. Itâ€™s not.â€™â€

However, relations later cooled after Scott claimed Mugabe had told him he was fed up and wanted to retire.

Scott disclosed: “I think if you asked him (Mugabe) he’d say it was enough.

â€œThat’s what he said to us a few months ago. I said the way forward in African democracy is the way we do it in Zambia. He said, ‘I absolutely agree, IÂ wish it would happen to me.’

â€œI think he meant it, or he was toying with the idea of meaning it. He wanted to hear how it sounded, maybe. Or something.”

â€œHe seems to doze off and then he suddenly laughs at a joke while in the middle of dozing. And very articulate, without a note, without a scrap of anything.

“He’s an Anglophone. He loves to give lectures on the English language, English weighing systems, English this or that. He was a teacher and so he taught himself all that.”

Scott made the remarks in 2013 but, three years later, Mugabe remains in power and insisted while visiting Japan last week that he would be Zanu PFâ€™s candidate for elections due in 2018.