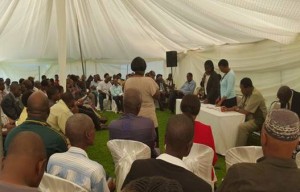 Participants during the Bulawayo hearing

The views that came out of the final round of hearings for the National Peace and Reconciliation Commission (NPRC) bill might have amplified calls by civil society organizations such as Heal Zimbabwe for the public to reject the bill as a bill that is self-serving and neglects the dire need for real national healing and reconciliation processes in Zimbabwe. Today saw three final public hearings being conducted in Chinhoyi, Lupane and Bulawayo. The last hearing will be conducted in Harare on the 20th of April 2016.

The hearings in Lupane and Bulawayo saw participants raising similar views particularly on the Gukurahundi atrocities that took place in Zimbabwe. The general sentiments that came out during the two hearings show that there can be no meaningful reconciliation and healing in Zimbabwe if Gukurahundi remains a shelved matter that is sensitive to talk about.

The issue of compensation also for those who lost their homes and loved ones during the atrocities formed the dominant debate with people suggesting that government should compensate all who were affected. The hearing in Bulawayo had 250 people in attendance while the one in Lupane had 110 people.

In Chinhoyi, the meeting started with a bad start as ZANU PF youths in attendance booed and interjected other participants as they were contributing their views. The major turning point in the hearing was when one participant argued that the bill gave the Minister responsible for National healing too much power. This sparked outrage and uproar from ZANU PF youths who broke into songs, slogans and dances. The Parliamentary team had a hard time trying to call the house to order but to no avail.

After a few contributions from the participants, the hearing was called off as many people raised some security concerns after some ZANU PF youths in regalia were seen milling around the venue.250 people attended the hearing.

Below are the views from the three hearings:

continue to suffer and cry for peace