FORMER Zambian acting President Guy Scott has escaped the diplomatic wrath of Zimbabwe over his negative statement against President Robert Mugabe because he is not part of the Zambian Cabinet. 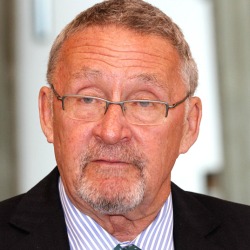 Scott was quoted at the weekend as saying Mugabe was still President of Zimbabwe despite losing an election eight years ago.

Zimbabwean high commissioner to Zambia Gertrude Takawira said her office was not bothered by Scottâ€™s remarks because he was not part of the Zambian government.

â€œWe are not bothered about the comments attributed to Zambiaâ€™s former vice president on Zimbabwe because he is not part of the Zambian government but our standpoint is that with the Government,â€ Takawira said.

She said in an interview Monday that the Zimbabwean mission in Zambia learnt of Scottâ€™s disparaging remarks against President Mugabe from news reports and when Minister of Foreign Affairs Harry Kalaba dissociated Government from the former vice presidentâ€™s remarks.

Takawira said Zimbabwe would not comment on every individual Zambianâ€™s comment as they have a democratic right to express themselves.

She however said Zimbabwe was pleased that the Zambian government quickly dissociated itself from the statement attributed to Scott.

â€œAs Zimbabwe, we learnt about the issue through the media but we go by what Minister Kalaba who dissociated Zambia from Dr Scottâ€™s statements. We cannot comment on every individual Zambianâ€™s opinion but what we standby is what the Government issued through the minister,â€ Takawira said.

â€œWe donâ€™t want this country to be like Zimbabwe. Why should we voluntarily become like Zimbabwe, where the President can lose an election and eight years later, he is still there,â€ he said.

But Kalaba castigated Scott and dissociated the Government from the sentiments he described as being in bad taste.

He advised Scott to respect Zimbabwe as a sovereign state, which has managed its affairs since independence.

Kalaba said he did not want Zambia to be misunderstood by its eight neighbouring countries with whom the country still enjoyed warm and cordial relations.

Zambian president, Edgar Lungu, has been to Zimbabwe a couple of times to consult with Mugabe. During one of his trips to Harare, Lungu told reporters that he was â€œlearning a lot from Mugabeâ€.

Last week, Lungu kicked up a storm when he said it was going to be difficult to control violence as Zambia prepares for presidential elections slated for August.

His statement was interpreted to mean that he was saying violence was going to determine the poll outcome.